The times, they are achangin...

Memphis In May Race Report
May 19 & 20
Millington, TN
For six years now, I have been more successful at long course races than short course. I kid you not, I dread the bike portion of a sprint tri more than anything else in the sport. For those same six years I've had decent run and swim splits, but lagged on the bike. Those times? They are achangin!
This past weekend I headed down to race the Memphis in May triathlons. Memphis is one of those Midwest classics that has been on my to-do list for a long time, but it just never lined up right. Well, two weeks after racing Wildflower I was ready for something shorter and faster. Memphis was definitely the answer.
I say Memphis in May triathlonS because there are actually two events. Saturday is an off-road tri and then the headliner olympic race on Sunday. I was competing in the Amateur Challenge competition which is scored by adding both race times together . I headed down with my wife (who is sitting out of racing this year due to being well into her second trimester!) and my brother's fiancee. Being relatively new at my current job I don't have a lot of vacation to spare so we left for Memphis after work on Friday. We rolled into town around 2 AM, caught about 4 hours sleep then headed to the race course. In mountain biking, course knowledge is everything so I wanted to get there early to pre-ride the course. Turns out this was mostly unnecessary. The mountain bike course consisted of about two-thirds grassy fields and 1/3 technical singletrack.
Memphis in May Off-Road Tri: Saturday, May 19.
Swim: The swim was somewhere around 600 yds. Water temps were in the upper 70s so I opted not to use a wetsuit (I wish USAT would change the wetsuit cut-off to 72!). Even if it puts me at a slight disadvantage I greatly prefer swimming without the wetsuit- even if it is a really, really nice 2XU Elite wetsuit! I went pretty hard on the swim came out in around 9 minutes. 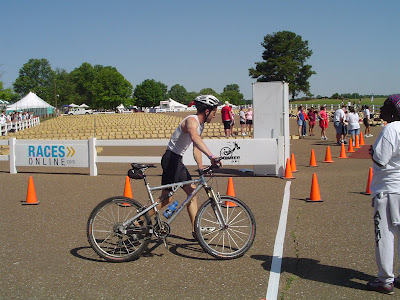 Bike (10 miles): I love mountain biking. If I actually lived someplace with mountains I would probably never touch my road bike. The Memphis in May Mountain Bike course was actually better suited to a cyclocross bike, but they wouldn't let me use one (I asked). It was a brutal ride simply because it is uber-difficult to ride a fat tire mountain bike in grass. You can never seem to get going. The short technical singletrack section was actually pretty decent. A good twisty woods section was followed by the coolest part of the weekend: the kudzu hills. Part of the course goes right over what I assume is the remnants of a strip mine. There are short, steep hills and a steep drop-offs to a small pond. What made it so unique was the kudzu (an invasive species of vine for those of you not in the know). The kudzu had so taken over this area that we could have been on a trail in a tropical rainforest. Awesome. I picked up a couple places over the course of the bike, but also got passed by two racers. For you X-terra racers, I just installed a new set of tubeless Maxxis Ignitors. So far they really do seem to be a great all-conditions tire. My first foray into tubeless and I love the traction! The dual suspension Titus Racer-X was overkill for the course though.


Run (3 miles): The run covered some of the same grassy fields with rolling hills. Pretty tame and uninspired for an off-road run. I felt pretty good and was giving it about a 90% effort. I picked up a number of places and only got passed once. At about mile 2.5 I went around a guy from my age group. I gave a little surge to try and get clear, but he stayed with me. Thinking about Sunday, I didn't want to completely trash my legs. Unfortunately my nemesis had other plans and started a sprint which I decided I had better counter. I turned it on for the last 200 yards and won the sprint by a couple seconds. Turns out this was a good thing since that kick was for the age group win.


I finished 9th overall in a time of 1:03:35. They haven't posted any splits. It was a good first day and I figured I'd be logging a heck of a training weekend if nothing else!


Memphis In May Olympic Tri: Sunday, May 20.

After a stellar nap Saturday afternoon I was ready to give the Olympic distance race my best shot. Olympic distance is a bit of a misnomer. The race is billed as Olympic but everyone knows the bike course is a little more than a mile short. Therefore the ave. mph you see in the results is always a bit fast. I've actually raced more Ironmans than Olympic distance races. I've never really had what I consider to be a great sprint or olympic distance race. My focus has been long-course racing (as it is again this year) so I never worried about it too much. Part of my overall season plan for this year involves more short races and less half Ironmans. The plan is to improve IM speed and power by racing shorter distances. If Sunday was any indication, the plan is working!

Swim (~1.5K): MIM is fairly unique in the fact that it uses a time trial start rather than waves. I really like this format. Racers ended up more spread out on the bike course so there was much less drafting. With the TT start, it is really just you against the clock. The water was again about 76 so wetsuits were legal. With a 1.5k swim I wasn't willing to give up the wetsuit benefit. My biggest problem with wetsuits in warm water is overheating. I came up with a great solution to this one. While waiting in line I spotted an ice cooler. Sure enough it was open and I broke into one of the bags and started dumping ice into my wetsuit. I got some funny looks, but it actually worked quite well. We're supposed to need the wetsuits to keep us warm and here I am dumping ice into mine! The TT start really allowed me to ease into the swim rather than the chaos of a fast wave start. My stroke felt long and smooth. I am faster with the 2XU wetsuit than without- if I can keep from overheating! Due to the TT start I went around way more swimmers than I usually do in a wave start. Came out of the water in 20:28 which is a very solid swim for a former 50 yard freestyle specialist! 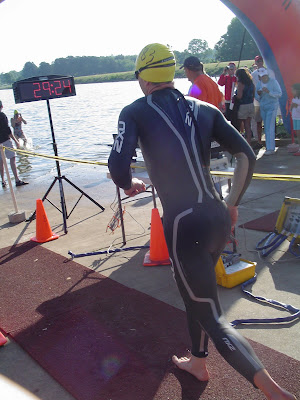 Heading off to the swim in nice 2XU
wetsuit packed with ice!

Bike (~40K): The bike course is a little more than a mile short of 40K. So when you go look at the split times they are super-impressive. This is easily the fastest course I have ever ridden. There were really no hills to speak of. Race morning was almost windless. I like the Power Tap the more I train and race with it. I know that my functional threshold is around 270 watts. For a 40K I wanted to be 90-95% of that. I averaged about 250 watts- right on track. This corresponded to a 58:30 bike split and 24 mph ave! Easily my best short course bike leg! I've never even time trialed that fast. In all my years of racing my bike place relative to the rest of the field has always lagged behind my swimming and my running. By doing tons of bike training year in and year out I've made small improvements every year. This could be the season where my biking finally catches up! 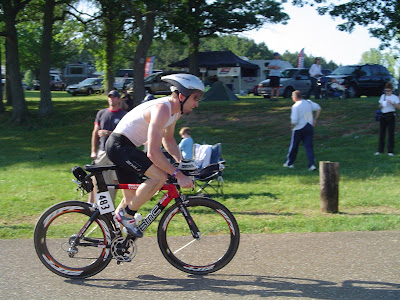 Run (10K): I got off the bike thinking my legs were going to be trashed from the stellar ride and I was fine with that. To my surprise my legs actually felt pretty good. Here's where too much long course racing may have held me back a bit. I'm so used to playing a conservative hand for long course that I fell into the same routine for this race. My legs felt good, but I was worried about blowing up so I took the first 3 miles at about 80-90% of all out. I hit 3 miles and figured I had nothing to lose. The run course has some rolling hills which are partially offset by having some shade as well. I felt pretty good for the rest of the run. I didn't race with a watch, but just going off feel I knew I would be in the 2-2:05 range- big time PR! I ratcheted it up to darn near 100% effort for the last mile. My run was 38:16 (6:10 mile pace).

The end result? 2:00:09! 9 seconds from going sub-2 hours! Sub-2 has always been one of my long-term pie-in-the-sky triathlon goals. MIM was short of being a full olympic distance, but I'm finally in the right neighborhood. This race draws in top-notch competition. What for me was an awesome time only put me 10th in the 25-29 age group! I was 30-something overall including the pro field, so that's not too shabby, I guess. I managed to move up a couple spots in the 2-day rankings and finished 6th overall in the amateur challenge. Full results are here.

Memphis in May is a great venue for turning in fast times. I liked having the option of racing twice- good training and seemed to make the trip more worth it. The TT-style start is great for beginners and it seemed to cut down on drafting as well. The post-race barbecued pork and Krispy Kreme doughnuts were outstanding! Definitely a must-do tri.

congrats on your off-road, and on-road success... too bad about that 6:10 pace though... i can see why you would be disappointed for holding back!

I love reading your race reports. I agree with Bolder, bring a little of that 6:10 my way!

We'll be looking for sub 2 in the future! Great job on the two races - MIM with it's time-trial start looks to be one to do some day. Plus they advertise some great eats - is that true?

Nice job chris, just need to bring on the pain in the run to break 2 hours!

On another note, I just got back from the Triple-T...with it fresh in my mind I can say without a doubt its in a different ball park when compared to Wildflower. WF is tough but when guys that can do close to 4 hours at WF struggle to get close to 5 with drafting allowed you know its got teeth!

Still the best Tri weekend of races ever though, kicked my ass well and truly.

Man, you're a machine...what an awesome report!