One of the formative experiences of my life has been running cross country for Augustana College under hall of fame coach Paul Olsen (who also happened to be an awesome professor of literature). Before each cross country season began we boarded a tour bus and headed to Minnesota for a week-long camp. At camp we did tough workouts twice a day, but in between we bonded as a team around the campfire, during horseshoe tournaments, sand volleyball matches, canoe trips and water skiing. It was such an amazing experience -in part- because you were surrounded by enthusiastic people all working towards a common goal.

In the years following the completion of my degree I tried to replicate this experience on a small scale by taking training trips with small groups of friends. We had some great times on these trips, but it really wasn't an adequate substitute.

As I got more into triathlon, I would passionately research week-long tri camps in exotic warm locations. Price tags that often hit 4 figures prevented me from doing anything but looking!

Fast forward to this past winter. I'd had my eye on Camp Wokonda near Peoria, IL as a great possibility for hosting a tri camp. I actually convinced my wife to take her high school cross country team there for a sort of trial run camp last summer. I talked the idea over with my buddy and fellow Kona qualifier, Chris Daniels. He got excited about the project, so we decided to give it a go and created the aptly named C&C Triathlete Factory Camp. Our founding principles were to bring the tri camp experience to Illinois and make it affordable for the average triathlete. 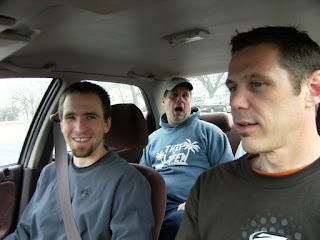 Infamous Chris & Chris with a member of
the Hartman family who just heard about
the Hill Brick of Death!
After lots of planning and meetings the camp finally happened two weekends ago. In all, we had 14 campers. Most were beginners, but we had a few Ironman finishers in the group as well. We had a big age range and a nice split among the genders. I had probably only met 1/3 of the participants prior to camp.

Camp was Friday evening through Sunday afternoon. In total we did 2 swims, 2 bikes and 3 runs. In between workouts we had educational seminars and scarfed down huge amounts of home-cooked food (huge thanks to my mom and Chris's wife Sloan!). 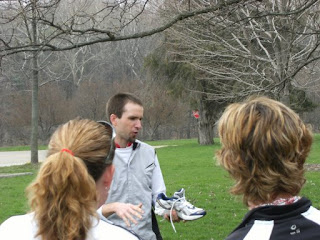 Discussing Transitions
The weekend weather looked iffy with the last cold remnants of this year's perpeptual winter and some rain mixed in. Everyone was in pretty good spirits for the first drizzly trail run on Friday night. Right away we discovered what was to be a theme for the weekend: hills! Most athletes in my area of the country have very little opportunity to train on any decent hills. I love the terrain of the area around Peoria because the Illinois River bluffs make for some challenging riding and running!

Swim workouts were at a pool only 15 minutes from camp. The Sat. night session lasted almost 3 hours and was all based on Total Immersion-style drills. A couple people really took to this method and had huge improvements in their balance and strokes. It reminded me how much I like swim coaching because I can see immediate improvements as opposed to biking and running were improvements are long-term. 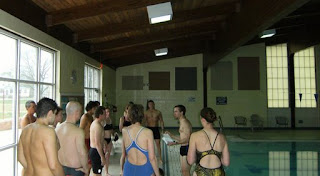 From the very beginning the website listed "Hill Brick of Death" for our last workout on Sunday. I did have quite a few inquiries on this one! I wanted our last workout to be a true challenge. Detweiller Park is home to the Illinois State High School cross country course. This course is mostly flat and fast. Funny thing is that the bluff right behind the course has some killer hills. The hills maintain a pretty tough grade (for Illinois) for almost a full mile. There are two hills that make a 4 mile loop, about half of which is going up! The idea was to ride as many hills as you can and then get off and run back up the same hills until you are thoroughly whipped. Many of the campers started the morning thoroughly whipped from the previous two days, so the hills really were a challenge to say the least! 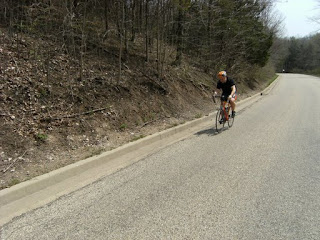 A camper suffering on the hills during the
Hill Brick of Death!
All in all the camp was the tremendously positive experience I was looking for. I really feel lucky that we had such an amazing group! On Saturday we rode in a cold, drizzly rain for more than an hour and I didn't hear any complaints! Our group was very helpful around camp and stuck to the schedule which was pretty tight all weekend. Being around some newbies really re-engerized me for this season! 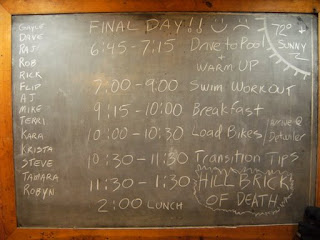 If you want a more detailed account of the weekend check out camper AJ's blog: Run Hard, Tri Harder. My partner in crime also has a write-up on his blog: Get Fast or Quit!

The big question has been, "Will you guys be doing this camp next year?" We're currently collecting follow-up surveys from this year's campers and adding up the bills. From the responses thus far, I think it looks promising! 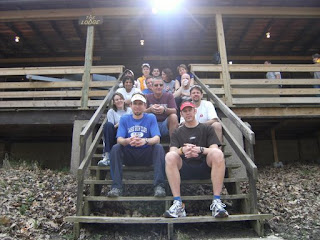 A group of tired campers (and instructors)
on the last day.

(I think I am really showing my age here. First I wrote about the 1980's wrestling flick Vision Quest and now I'm quoting C&C Music Factory! Geesh, after I've set the bar this high, I don't know how I can go on writing... )
Posted by Sweet at Thursday, May 01, 2008

Yeah, I used to LOVE dancing to that song at school dances. Agh! Did I just admit that? :)

Sounds like y'all had a great time - what a great way to be introduced to the sport!