One day of voting just not enough for you? Did you get a taste of the awesome power of democracy and find yourself wanting more? If you thought the presidential election was a nail-biter you ain't seen nothin yet!
Presenting the ballot for the 2008 Chicago Athlete Magazine, Athlete of the Year. Apparently my tri season raised enough eyebrows that I was named Athlete of the Month for the Nov./Dec. issue. I thought this was pretty damn cool in and of itself since there are gobs and gobs of great endurance athletes in Illinois. As it turns out, the Athlete of the Year is determined solely through popular vote. So you can just take your electoral college and.... 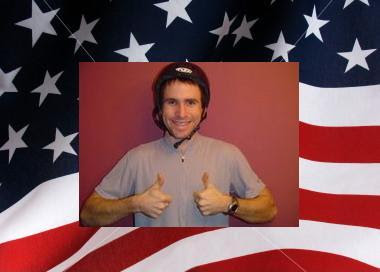 We here at Goal is the Journey encourage educated voting! Information about all this year's athletes of the month can be found here. There are seriously some great athletes on this list. Take a look and vote for the best one..........even if it is not yours truly! Check out the kid athlete of the year contest as well. I am trying to arrange a town hall race-off among my esteemed competitors that would involve a triathlon, a cyclocross race, rock climbing and trivial pursuit! As of now, I don't have any takers....
To vote, you need to fill out a pdf ballot and send it in to the editor. Voting information can be found here. Note that a couple criteria have to be met for the vote to count. Your e-mail subject line has to have "Vote 2008- Adult Athlete of the Year" Also, you have to mark BOTH a male and female or else the ballot is tossed like a hanging chad. Attach the completed ballot to an e-mail with the above subject line and send to: editor@mychicagoathlete.com
If elected, I will mandate that all employers consider travel to races a regular part of the work week as well as provide all employees who did a morning workout with a nap. Bicyles, wetsuits, running shoes and energy gels will all be tax-deductible. The week before Kona shall be considered a national holiday. I will mandate that deep-tissue massage be covered by all insurance companies (but not those nancy-pancy spa massages). My alternative energy plan is simple: everyone needs to eat more carbs. My healthcare plan entitled HTFU will save countless billions. Break your arm? Duct tape and R.I.C.E. (Rest, Ice, Compression and Elevation). Bronchitis? 5X1 mile. Hard.
Posted by Sweet at Monday, November 03, 2008

You've got my vote dude.

When you get elected, you totally need to work with them on updating their voting process ha!