Even if you’ve never been there, playing word association with New Orleans is a simple task. It is one of those iconic American cities that is part of our national psyche.

One of the things I love about triathlon is that it has taken me to some beautiful areas of the country that I probably would have missed otherwise. I had never been to New Orleans before and probably wouldn’t ever schedule a family vacation there! So when it came up as a possible Evotri team race I was all for the idea as long as it was a roadtrip! The race is very early for us Northerners who are still trying to fit outside rides in between snowstorms, but the opportunity to visit NOLA outweighed these “minor” details. As a bonus, our teammate Charlie (TriCajun) would be our resident “local” and tour guide.

It has been a good number of years since I have been part of a proper roadtrip. With airline bike fees that amount to highway robbery, I see more of these in my future. Our plan was to rent a cargo van and hightail it south. The roadtrip crew consisted of myself and my 3 Wisconsinite teammates: Stu, Robby B. and Michelle. This epic adventure began on the Wednesday before the race. To maximize our New Orleans time, our most excellent itinerary (courtesy of Robby) called for driving all night Wednesday and arriving early Thursday morning.

The road trip did not disappoint. Much silliness and smack talk (mostly at Stu’s cost) ensued. The highlight of the trip down was definitely dinner. For me personally, the trip South was just as much of a culinary excursion as a triathlon destination. I have more than a passing fondness for Cajun food and couldn’t wait to try as much of the real thing as I could cram down before and after race day. This created the necessity for Rule #1 of Evotri roadtrip: “Thou shalt not eat the forbidden and nasty food served by chain restaurants.” Dinner time on the drive down put us in Southern Missouri for dinner. Still too far north for Cajun food, but right smack in the middle of barbecue country! A beacon from the great god of pit barbecue led us from the interstate to the shrine of this holy land: Chubby’s BBQ. I knew before we hit the gravel parking lot that BBQ nirvana awaited within. The all-particle board interior reinforced the notion that this establishment cared about their product over pompous décor. Robby B. and I split the Chubby’s Sampler which should have rightly been reserved for 4+ human beings. From the pit barbecue Cubby’s procured ribs (of course), pulled pork, ham, chicken, bbq beef and a plethora of sides. Chubby’s did not disappoint with some of the best ribs and pulled pork I’ve ever had. I predicted that my salt levels would be topped off for the next month, and I’ll stand by that.

We arrived in New Orleans at about 3am and since I couldn’t convince anyone to go straight to Bourbon Street we checked into our awesome accommodations for the weekend. Thanks to a Stu connection, the team was staying in a huge old New Orleans home. This was so much better than a hotel for both team atmosphere and for getting a true sense of the city.

Thursday morning we got up and headed to Lake Ponchatrain (yes we swam in that lake!) to do a swim. Winds were out of the north and kicking up huge 3ft swells. Not to be deterred the fearless members of Team Evotri got in and swam in the chop for 15 or 20 minutes. Getting out of the lake proved to be a dangerous endeavor as barnacles and/or sharp cement claimed a little chunk of my foot and contributed to Michelle’s epic “swim crash”.

The rest of Thursday was a relax and see the sites day. More great food with Beignets and café au lait for breakfast and an authentic Cajun dinner with Charlie and his wife Lisa. The rest of the night was a completely uneventful trip to Bourbon Street. Corollary to this, I can neither confirm nor deny any video of any Evotri team member riding a mechanical bull that may or may not appear on YouTube.

Friday saw more members of the Evotri posse roll into the Big Easy. You might even say they were fresh on the scene….;) The big event of the day was a round table discussion with some of the Zipp sponsored pro athletes conducted by Stu. The all-star lineup included: Linsey Corbin, Heather Gollnick, Desiree Ficker and Chris Macdonald. Stu is pretty much a slave-driver and makes us do all kinds of work for him. I was forced to go over to Desiree Ficker’s hotel and walk her over to the loft where we were doing the discussion. I tell you the sacrifices I make for this team are deserving of saint hood! In any case, keep your eyes on the Zipp site for a really terrific discussion with these athletes. 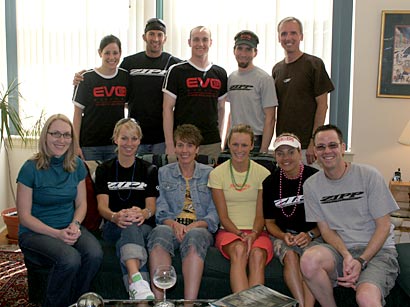 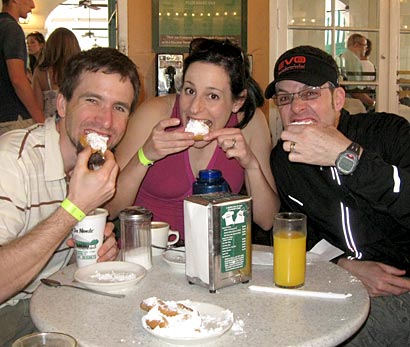 By Saturday the whole Evotri team plus friends Steve and Sarah had congregated at the IM NOLA House. Another practice swim with south winds was much less eventful. We made the required trip to Café du Monde for more coffee and Beignets (awesome)! Getting all the bikes to transition and finally getting some good team photos were the priorities of the day. Unloading a van full of matching BMCs with Zipp wheels really made us look like a serious team. Steve shot some great shots of the entire team in uniform. 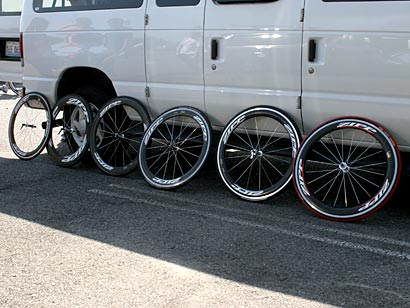 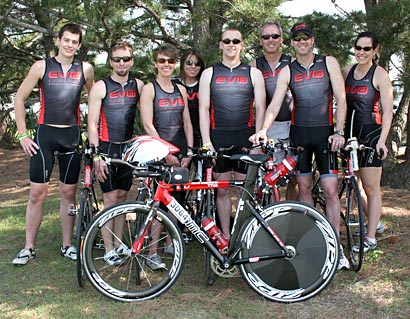 Nice job down there. Nothing like a spring race in hot/humid conditions. Hopefully the hurricanes on Bourbon St. washed down nicely!

KDog will be out here in Boise at the end of the month. His job will be to relay a report of pain and athletic pleasure to help bait you out here. Skip the 70.3 here so I can take you to the summits. Good times.

Man, I don't know if I REALLY WISH I was in that van ride down, or I'm REALLY HAPPY I WASN'T in that van!!