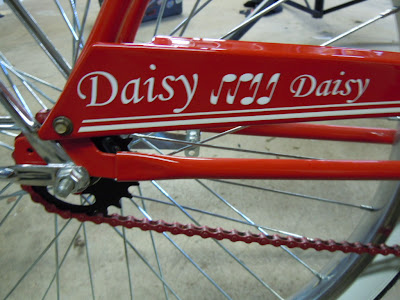 There is a flower within my heart,
Daisy, Daisy,
Planted one day by a glancing dart,
Planted by Daisy Bell.
Whether she loves me or loves me not
Sometimes it's hard to tell,
And yet I am longing to share the lot
Of beautiful Daisy Bell.

Daisy, Daisy, give me your answer, do,
I'm half crazy all for the love of you.
It won't be a stylish marriage -
I can't afford a carriage,
But you'd look sweet on the seat
Of a bicycle built for two.

We will go tandem as man and wife,
Daisy, Daisy,
Ped'ling away down the road of life,
I and my Daisy Bell.
When the road's dark, we can both despise
P'licemen and lamps as well.
There are bright lights in the dazzling eyes
Of beautiful Daisy Bell.

I will stand by you in wheel or woe
Daisy, Daisy,
You'll be the bell which I'll ring you know
Sweet little Daisy Bell
You'll take the lead on each trip we take
Then if I don't do well
I will permit you to use the brake
beautiful Daisy Bell

History was one of my undergraduate majors (literature was the other) and continues to be one of my abiding passions. Naturally, anytime that I can bring my passion for history together with my passion for cycling I'm like a little kid on Christmas morning. This tandem restoration project has been quite a few years in the making, but before I get to that there is another bit of historical trivia that relates to the inspiration behind the original Daisy Bell song.  As the story goes, when Dacre (an English popular composer) first came to the United States, he brought with him a bicycle, for which he was charged duty. His friend joked, 'It's lucky you didn't bring a bicycle built for two, otherwise you'd have to pay double duty.' Dacre was so taken with the phrase 'bicycle built for two' that he decided to use it in a song.

I haven't been able to pin down a date on the bike itself. It is definitely late 50's or early 60's. The first time I saw a picture of one of these I fell in love with it. To me, it is just so iconic of that era. The cars and bikes from that time period both had gorgeous curves with barely a hard angle anywhere. So obviously the bike is good old American steel and quite heavy.  I had saved searches set up on Ebay for years before I finally found this one within a couple hours of home.  Actually I bought two bikes, neither of which was actually in working order.  Both had been stored outside for some period of time, been repainted with probably a can of spray paint and were just generally abused all-around.

Since I knew I didn't have time to jump right into the stripping and painting (I had just started a new job and was in the process of buying a new house and selling the old one) I took parts from both bikes to make a franken tandem that sort of worked.  It was lots of fun to cruise around on, but the handling is complete crap and the gearing was too high.

Fast forward a couple of years and a friend had found me an original chainguard in excellent condition to repaint.  I thought this was as good an excuse to buy a sandblaster as any, so I picked up one of those and started the hard labor of removing multiple layers of paint and rust.  There were so many problems that I just took everything back down to the bare metal.


Originally I was going to dredge up my rusty and dated automotive painting skills, but decided if I was going to put this much time and effort into the project that I wanted a professional paint job with modern paints. Enter Mike's Collision Center. Mike Mavec is a local triathlete and owner of Mike's Collision.  He had just begun dabbling in bike painting and I approached him with the tandem project. We made a deal to swap a paint job for some coaching-related services. 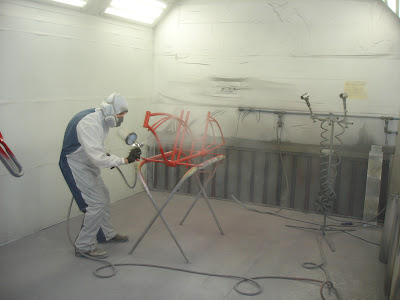 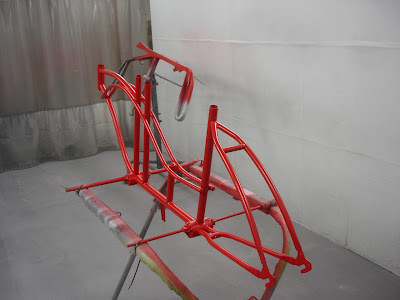 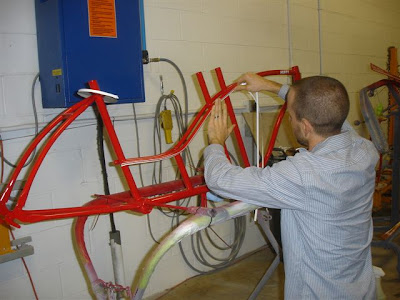 Don Fogler of Fogler Signs did a great job helping me re-create the original decals that all went under the clearcoat.

After painting, decals and clearcoating it was time for rebuilding.  I was only able to salvage a few of the original parts. The chainrings and seatposts are original but that's about it!  I was amazed at how cheap heavy steel parts are!  The new wheelset cost $45 and the fenders were like $20.  Refreshing since a single tire for my triathlon bike runs about $75!  Getting everything to work took some tinkering.  The fenders and tires are both wider than the originals, but I love the look!  I still need to do some tinkering with the idler pulley that maintains chain tension. 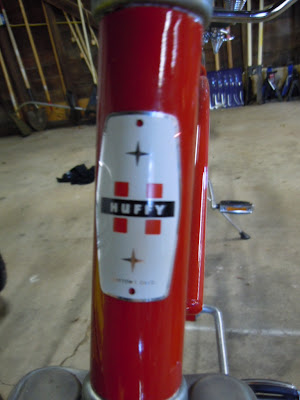 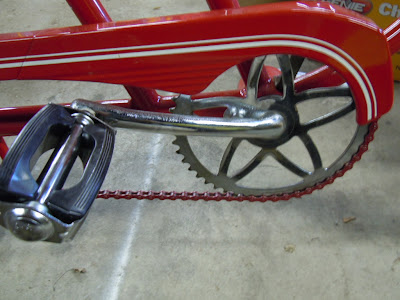 The new bike's maiden voyage was a trip of a couple miles around Lexington.  We live right off old Route 66 and Cara and I did a portion of the ride on the old road that is now a bike path. It seemed so iconic to be riding a classic 1950's American steel frame on the classic highway from the same era!  Really looking forward to having this bike to cruise around Lexington on!


So the bike basically handles like crap.  It has a flimsy front fork that has to provide direction for a 50+ pound bike plus two riders.  Little spooky, but the thing isn't meant to go fast!  The only brake is a coaster brake which is pretty effective actually.  I haven't had a bike with a coaster brake in probably 20 years, but it was amazing how natural that braking motion is if you grew up riding old school bmx!

Those of you with short cycling memories probably only associate Huffy bikes with their current line of garbage department store bikes. In the 1980's Huffy invested heavily in supporting professional U.S. cycling and developing cutting-edge race bikes.  The 7-Eleven cycling team rode Huffys for a few years that were actually re-branded Serottas (Huffy made their own copies for the average racer).  In the 1984 and 1988 Olympics athletes aboard Huffys took home gold and silver medals.  Huffy even got into developing time trial bikes and eventually triathlon bikes.  Mark Allen's 1991 win the Ironman World Championships in Kona was aboard a Huffy Triton (pictured below).

So what's the next project, you might ask? Well I've got something at least equally as cool as the Daisy Daisy in the works: an Evel Knievel 10 speed!  As far as I have been able to determine this is one of the first production bikes to be equipped with a disc brake! Check out the video of the man selling these bikes! Mine is currently in considerably worse shape. When I have this thing done and find a stars and stripes jumpsuit to match, I am going to be so badass!

I just bought a Daisy today, I'm looking to get it riding a little better. Was wondering where you can find parts for this thing?

I bought an old Daisy Tandem and am looking into getting it looking/riding a little better. Yours looks great. Nice work!

Is it terribly hard to find parts for this thing. I'm not worried about getting original parts or anything, just parts that will look good and work and preferably be cheap. Any advice would be appreciated.

Hi Mark! Most of the parts I put back on my Daisy were not original. All sorts of online catalogs sell this stuff and it is quite cheap compared to most bike components. I got most of my stuff from here: http://www.bikeworldusa.us/

I'm finally getting around to building this thing. I am having trouble finding a double cassette for the rear. Do you remember where you found yours? Please feel free to follow up by email if that is easier. MarkBFryME@gmail.com.