The 2013 tri season has been good to me thus far.  When other tri geeks ask me how my training has been going I've been replying that I've had really good consistency getting workouts in since January, but my overall volume has stayed lower than I would like (generally 6-10 hours per week).  My spring focus has been all about trying to regain some short course speed that I never really had in the first place. In the gene pool lottery I definitely got the go-long DNA.  Both my spring and summer "A" races are/were olympic distance so I've tried to do a better job of hitting some shorter, hard intervals on the bike and the track. It sorta worked.  I've been racing a bunch both to build speed and reacquaint myself with short course suffering.  None of these races really needs a full-blown race report, so here's the Readers Digest version.

I know, I claimed to be working on speed and still start my season with a trail 1/2 marathon!  This race has quickly become one of my must-do favs.  The race is about 1.5 hours from me, but the terrain is unlike anything else in Illinois.  It is held in Sand Ridge State Park and it lives up to its name.  There are both lots of sand and lots of little cacti.  Not only is there sand, but it is deep and loose.  It also has hills. What's not to like?  This year there was snow on top of the sand in places (which was actually easier) and it also was very rainy and just over freezing.  I pulled off an overall win at this small-ish race with a 1:35.  I have lots of half Ironman run splits around 1:25 and regular half marathons around 1:20 so that might give you a sense of the course difficulty!

Sullivan is one of the earliest Illinois triathlons.  It is a sprint with a pool swim, then the remainder of the race is outside.  It's always a good early-season benchmark and in past years has had a few pros show up. Race conditions were cool and rainy (start keeping track of that!). No pros this year helped give me the overall win with almost a 5 minute margin.  That was my 3rd overall win at Sullivan.

I added Rev3 Knoxville to my schedule for two reasons. #1 I was able to combine the race travel with a library conference in Nashville, so most of my travel costs were covered. #2 My Evotri teammate, Simply Stu is a fixture at the Rev3 events and I knew we'd get to catch up a bit following our spring team training camp in Chattanooga.  All race week was rainy and cold and race day was the same.  Some of the pros raced in their swim skins to try and stay warm, some age groupers kept their wetsuits on for the bike!  The river water temperature was in the upper 50s so I spent the first 1/3 of the swim trying not to hyperventilate.  This race has a super-long run to T1 which really slowed times down. I didn't get a chance to preview the bike course and with a hard rain coming down I road really conservatively and it showed in the time (1:06).  I was pretty happy with my 37:51 run split all things considered. 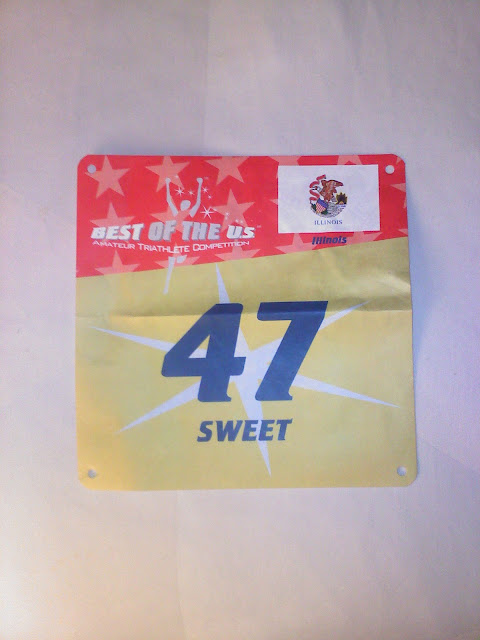 The Best of the U.S. Championship is an interesting amateur race series.  Each state has one race per year designated as the qualifier for the championship race the following year.  The top 3 male and female racers qualify to represent their state.  I had qualified once or twice in the past, but the championship race was always either too expensive to travel to, or conflicted with something else.  I qualified last year at our local Evergreen Triathlon and the championship this year was held in conjunction with Leon's Triathlon in Hammond, IN which is only about 2 hours away. This was my "A" race for the spring and I hoped to finally get under the elusive 2 hour mark.  I went 2:00 and a few seconds at Memphis in May in 2008, but that bike course was short. After a very rainy week, race day looked good in the forecast.  Race morning I was overdressed and had to go looking for a t-shirt.  About 45 minutes before race start a cold front blew in and temps dropped into the 50s and guess what- the rain started again (but not as bad as Knoxville).  The water temp was reasonable and I knew I was going to have a good swim with lots of fast feet to draft. 21:21, check.  Onto the bike the wind was blowing, but not terribly.  I still thought I had a shot at the sub-2.  This race markets itself as "Worlds Fastest" but that seems really overblown.  The race consists of two loops and each loop had 3, 180 degree turnarounds.  That plus some fairly rough roads and a few small hills already put "Worlds Fastest" into doubt.  Turns out the bike course was also about .7 of a mile long.  I rode pretty well but finished with a 1:03 for 25.5 miles.  Of course, I didn't know the details at the time, I just got after the run since there were already a bunch of good athletes up the road.  I clicked off a superb 36:05 10K on a legitimately flat and fast run course.  If the run was accurate it was definitely my fastest ever.  I finished in 2:03:02 which probably would have been a touch over 2 flat with an accurate 40K bike. I finished 16th in the Best of the U.S. field and 26th overall. Normally I'd be disappointed with that kind of placing, but this was a seriously stacked field of racers. 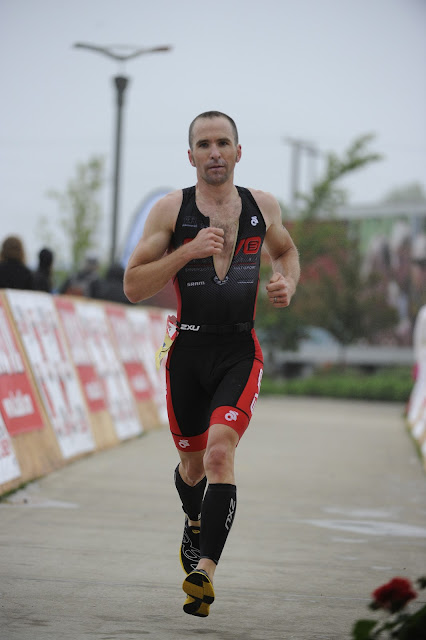 This was also a new race for me and not on my schedule originally.  It was Father's day weekend and the race was held at Rock Cut State Park in Rockford.  It seemed like an ideal way to combine a family camping trip with some racing.  That concept worked pretty well except that it rained on me again.  Pretty hard, but slightly warmer than Knoxville and Leons! This race was not that large 200+ but was part of a college series, so had a bunch of college teams racing.  I have to say this was one of the least-well organized events I've been to in awhile. They weren't ready for packet pickup, then they weren't ready for the race start which had to be pushed back.  Swim cap colors were messed up. The bike was quite dangerous since it was an out and back on a fairly busy road.  Lastly almost none of the run course was marked causing me (and many others including the eventual winner Thomas Gerlach) to go off course.  In the end I finished in 2:10:31 which included another long T1, another long bike course and a detour on the run.  I finished 5th overall, but missed prize money by 20 seconds which was a bit frustrating considering my run detour was at least 45 seconds.