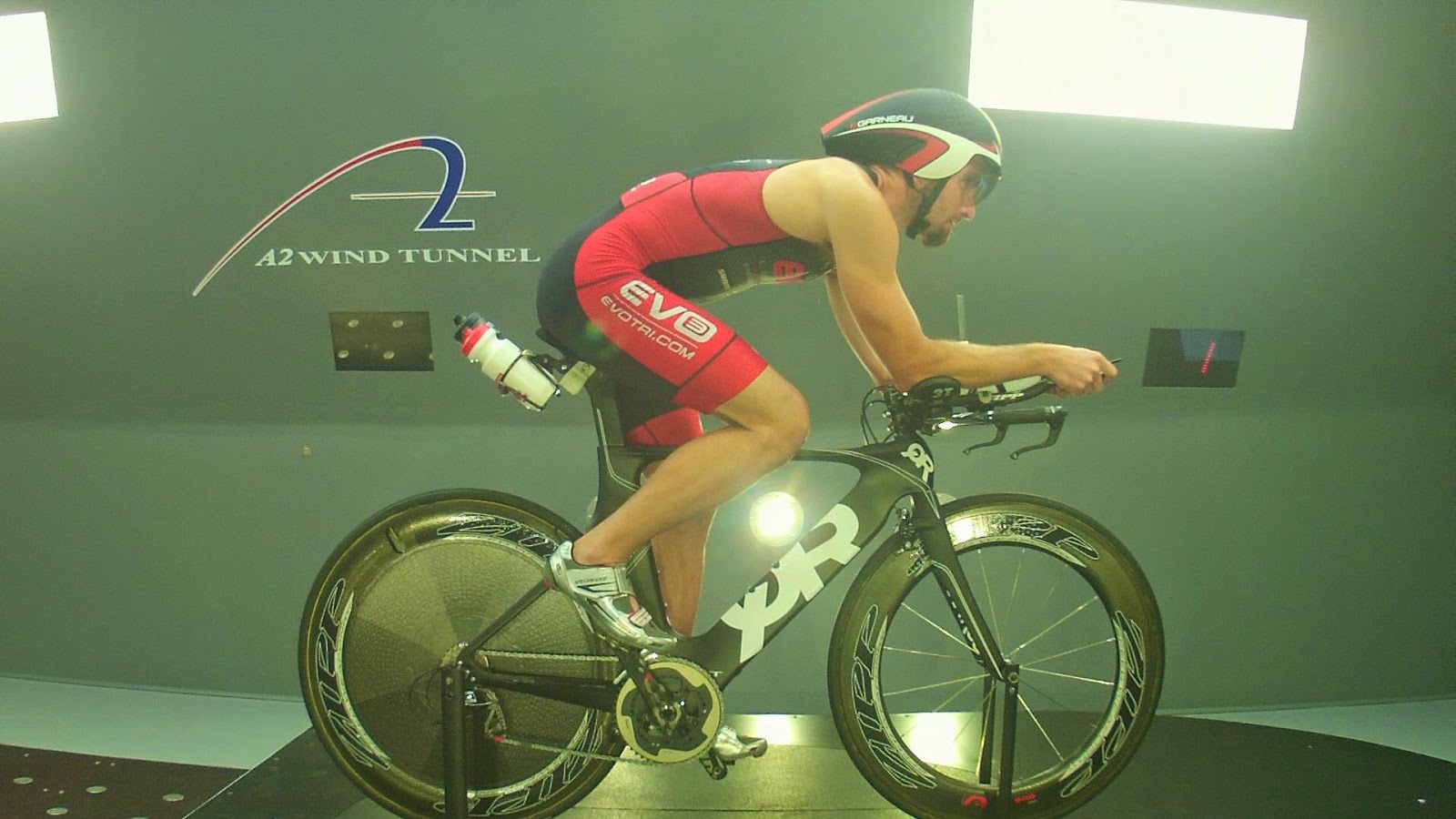 I learned long ago to embrace my inner tri geek.  The national and international regulations surrounding triathlon are far less restrictive than those imposed by the UCI on professional cycling.  You wanna ride a crazy aggressive forward position or wear obnoxious compression socks?  Triathlon says go for it, UCI says no way. Moreover, at this point in my career really long races are the only thing that I am passably competitive at as a professional.  When you start looking at how tiny savings add up over the course of 112 non-drafting miles then the geekiness starts to look more like a strategic calculation. For example, at my weight and average ironman bike speed every watt saved through drag reduction (or increased through training) yields a bit less than a 1 minute improvement. A wind tunnel visit is certainly the pinnacle of tri geekiness. You bust out all the aero equipment and start to look for these small marginal gains. For the great majority of riders though, those marginal gains can really add up.

Our joint summer family vacation (where we spend most of a week with my mom, my brother and his family) was near Asheville, North Carolina this summer.  This was about a 10 hour drive from Central Illinois, but it had the fringe benefit of putting me within 2 hours of the A2 Wind Tunnel in Moorseville, North Carolina. Fortunately they had two hours available during the time I would be out there. Generally people know that wind tunnel testing is one objective way to measure the aerodynamic differences between various pieces of equipment and positions.  They also know  it is prohibitively expensive.  Two hours of wind tunnel time will run you around a grand, which just seems absurd to me given that my total investment in my first road bike that I raced for many years was $300.  I checked the family savings account and it still had the same 7 cents that we've been able to put away the last five years!  Essentially all of our family equity is in the form of bikes and wheels, so I was able to liquidate a few things to fund my tunnel visit!  Even with the price tag, I think I can show that this visit was definitely worthwhile.

There has been a very cool trend among the triathlon community to openly share wind tunnel data.  This always comes with the standard caveat that you go to the tunnel because it is the only way to find out what actually works for you. The helmet that tested the best for me (Giro Selector) did so because of my particular position and back shape. If you already know all about drag coefficients, yaw, and aero watts and just want to see the raw data in an excel spreadsheet, click here. Below, I briefly explain the wind tunnel testing procedures and summarize the tests (runs) that I did during my trip.

The A2 guys had a great sign with the above quote from rocket scientist Werner Von Braun.  This is the real reason to go to the tunnel.  Cut through all the marketing hype and BS and find out what works for you in real time.


The way wind tunnel testing works is that they mount your bike on pedestal in the tunnel that can rotate in order to test both head-on and cross winds (yaw). The pedestal has a computrainer underneath that records power output.  You start out with the baseline position that you came in with and then make incremental small changes looking for drag reductions. Each "run" in the tunnel lasts a little over a minute during which time the fans come on and you test head-on and then at 10 degrees yaw.  The tunnel has a very cool projector set-up where while you are riding the floor in front of you displays 4 images: best run of the day, current live image for comparison, an overhead live image and a head-on live image. 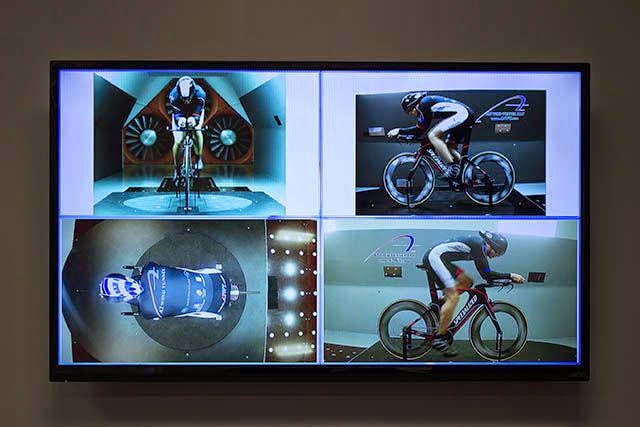 The testing is very methodical and progressive.  For example they will test bar drop in both directions (higher and lower) until drag stops decreasing and then you are done with that aspect.

For my two hours I wanted to test a few position changes and then a few pieces of equipment.  Thanks to sponsors Zipp and Quintana Roo I did not need to spend any time worrying about wheels or different frames.  My 808/Sub 9 disc combo and Illicito frame are as good as anything on the market!  I got a Guru DFU (Dynamic Fit Unit) fit from one of the best in the Midwest: James Coudright at SBR St. Louis.  That fit resulted in me comfortably riding far more drop than my past conservative positions. I came into the tunnel with what I thought was a pretty clean position aerodynamically and I really didn't expect any major changes.  I did want to find out if I could ride less drop without adding drag, though. 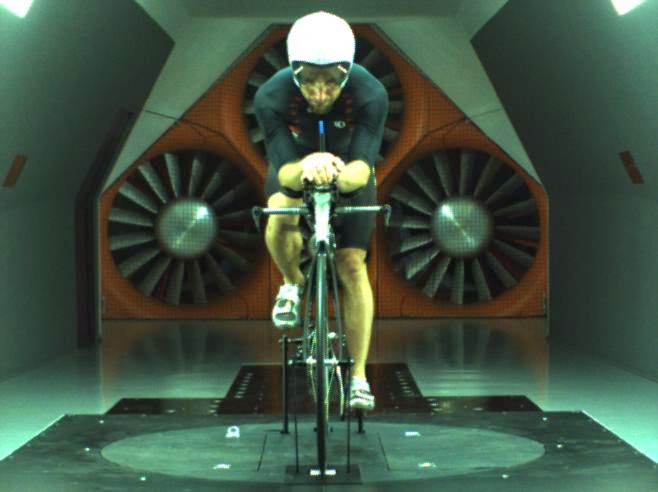 Let's walk through the various runs we did.  To keep things (somewhat!) simple I'll just list two numbers here: average aero watts and average drag coefficient. The average includes both head-on and 10 degree yaw runs.  Aero watts are the amount of power required to overcome aerodynamic drag at a given speed ( a realistic 23 mph on my spreadsheet). Drag coefficient CdA(m2) is the industry standard measurement and is the product of the coefficient of drag and frontal area.

Run # 2 Tie up front brake cable. This cable sticks out somewhat on the Illicito. Tying it up actually showed a small increase in drag, but this wasn't tested at yaw, so not really a comparable number to above.  Looks like QR was right not to sweat it about this cable.
182 aero watts, .274 CdA

Run #3 Helmet position change. I came into the tunnel with the new Louis Garneau P-09 aero helmet. For this run we positioned the helmet tail more towards my back.  First bit of drag reduction seen here.
173.5 aero watts, .260 CdA

Run #4 I was already riding about as much drop as possible on the medium-large Illicito frame.  We tried a quick test of removing my elbow pads which dropped me down 1-2cm more.  This actually increased drag a bit, so we didn't need to try and get any lower.
174.5 aero watts, .262 CdA

Runs #5-#7 All tested pad width (both moving pads in and out from my baseline setup. I already had a pretty narrow set-up and it turned out my baseline was fastest in this instance.

Runs #8-#9 Were done to find out if I could ride less aerobar drop without creating additional drag. While this is actually the case for some people, raising my bars up did create additional drag.  Back to baseline position again.

Runs #10-12 Tested whether or not I would be better off with traditional up-pointed ski bend aero bar extensions as opposed to my current S-bends.  The S-bends look like they put you in a very aero position, but this was not the case for me. I should see a nice little reduction in drag going back to the ski bends.  As a bonus, I think they are a little more comfortable than the s-bends.
171.5 aero watts, .257 CdA.

Run #13 I had my bars tilted up slightly which caused the airfoil shape not to be perfectly level. Leveling the bars out seemed to create a tiny gain, but it would be within the margin of error for testing.

Run #14 Was a test of my P-09 helmet without the visor.  The helmet actually tested better without the visor. I know some others have seen the same result when removing visors from various helmets.  Again visors look very aerodynamic, but they turn your head into even more of a sphere, which is not a good thing.
171 aero watts, .256 CdA

Runs #15-17 tested the following aero helmets: Giro Advantage II, Giro Selector and Kask Bambino. The best of these was clearly the Giro Selector.  If you look at some of the images from the runs with this helmet it sits really nicely on my back. It kind of looks like I might be straining my neck to achieve this position, but I was careful to only test positions that I could hold for 5 hours.
169 aero watts, .254 CdA

Run #18 tested the Torhans Aero 30 bottle vs. the Profile Design Aero HC between the arms bottle that was part of my baseline. There was no real difference between the two which was nice to know.  I will probably use the Torhans for long course since I can start out with more fluid.

Run #19 The last thing that I had time to test was a Pearl Izumi Octane tri suit.  This suit has short sleeves and an aero fabric.  When I initially heard the manufacturer's time savings claims I just assumed they were comparing to a loose fitting bike jersey which I don't race in.  In fact, this suit tests much faster for many (but not all!) people compared to a tight-fitting sleeveless tri suit.  A full half of the wind tunnel savings I found came from this last run with the PI suit. With the tunnel fans running at 30 mph I could feel that this suit was fast.  When you scale it back to a more realistic speed of 23 mph it dropped my aero watts to 161.5 (a 7.5 watt savings) with a CdA of .242 (.012 savings).

That's an impressive savings of 16.5 aero watts and a .025 reduction in overall CdA.  It's important to remember these numbers come from a realistic speed of 23 mph.  At that speed a savings of 16.5 watts would yield a time drop of more than 8 minutes!

Let's put these numbers into context.  First the ironman bike time savings from a good aero wheelset vs. a training wheelset at these same speeds (not 40km/hr which is often used) would be in the range of 6-10 minutes depending on whose numbers you use.  A good race wheelset will cost you at least $1000 and tops out at $3000.  Hey wait, all of a sudden my wind tunnel investment is looking really good for about the same amount of time saved!  Now let's look at how this investment might play out for me.  My two "A" races last year were Rev3 Branson half and Beach to Battleship full.  At the Rev3 Branson race where I qualified for my pro card I was second overall by 12 seconds.  Had I done this wind tunnel visit prior to that race it surely would have yielded a nice overall amateur win on my resume.  At Beach to Battleship I averaged about 22.5 mph and finished 4th overall.  An 8 minute improvement on the bike would have moved me up to 2nd overall along with a $400 increase in prize money.