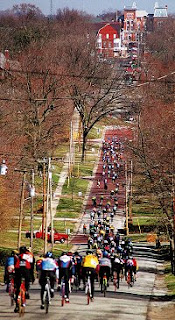 
I love chess. I can enjoy card games and board games, but there is something about that whole luck of the draw thing that drives me nuts. Chess is pure skill. No excuses. A bad move is a bad move. The fascinating thing is that a chess master will intentionally make a bad move to trip up the opponent somewhere further down the line. I am definitely not a chess master.

Bike racing is the chess game of the endurance world. Very little is left to chance. Unless you are strong enough to contemplate a solo breakaway, bike racing is almost the complete opposite of a non-drafting triathlon event. We triathletes work very hard to expend exactly the right amount of consistent energy during the bike leg. A good triathlon bike leg is steady the whole way. Most road races are anything but steady!

As part of my pre-season training, I hope to get in a few bike races. Hillsboro Roubaix was my second-ever bike race. A group of four local triathletes –myself, my brother Andy, C.D. and Brian- decided that we would go race together and see if we couldn’t hang with the roadies and maybe even make them suffer a bit.

The Hillsboro Roubaix course was outstanding! Hillsboro is situated between St. Louis and Springfield, IL. The 22 mile course (the cat 5 riders did two loops) featured a couple of good hills, twisty rough roads, heavy winds, and -like its namesake- even a couple miles of brick cobbles.
It was my first race in the new Race Athlete jersey and I figured it would pretty much go unnoticed in an Illinois bike race. I was wrong there! A triathlete named Rebecca who races for Team Kenda spotted the jersey and introduced herself. Very cool!

The triathletes discussed a few strategies ahead of time, but mostly we knew that if the peloton stayed together and it came down to a field sprint, we’d be sunk. The general game plan was to keep the pace high on the first lap and keep attacking the pack until something stuck. The temps were decent at the start (low 70s) and we rode pretty easy for the first 4 or 5 miles. Because of the high winds, no one wanted to leave the protection of the pack. The tri geeks started upping the pace and throwing in some attacks fairly early on. Unfortunately something happened to our strategy of attacking in pairs and there were a number of solo attacks that didn’t do much to the peloton, but gave us a heck of a workout! I think we were successful in pushing the pace a bit the first lap. I spent quite a bit of time at the front of the pack –and off the front- doing my part to keep the pace up. Most of the way through the first lap and the peloton was mostly intact. At this point C.D. threw down an absolutely huge surge. One guy went with him and then Brian and I bridged up to him. This was finally enough people off the front to make the peloton worry a bit. Other than the finish, bridging up to C.D. was the hardest that I worked during the race! Nice move man. By the time we re-grouped off the front, we were booking and the peloton was stringing out behind. We went easy through the neutral feed zone and then back in town we hit the two biggest hills fairly conservatively. As we finished lap one, I was leading through town and pulling hard, but not attacking. 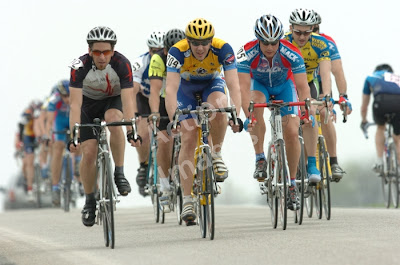 (A nice copyrighted photo. C.D. is center yellow, I'm on the left)

Oddly enough, a group of 7 riders managed to maintain the earlier gap on the rest of the field. There actually wasn’t another big move that put us at the front. We organized quickly and started a rotating paceline. Really good coordination and communication among our little group. We were running scared and working hard, but pretty much everyone was sharing pulls. Started to feel like a hard time trial for awhile since the pace was now very consistent. At a few points I watched my heart rate creep up over my lactate threshold and I was worried that I couldn’t hang. I stuck in there and the group whittled down to 6. There were two riders from Team Mack, two from Robbie Ventura's Vision Quest team, myself and a guy from Southern Illinois University. The six of us stayed clear the entire lap. I would later find out that the remnants of the peloton never really re-organized. Unfortunately, none of the other tri studs made the break, but I think our general strategy of keeping the pace high worked to some degree.

Nearing the end of the second lap was awesome. I knew that I had a top 6 placing secured. About 3 miles from the finish everyone sat up and started riding easy. I felt like I was in a big Euro race and we were all catching our breath for one last round of attacks. When we hit the big hills again, I thought I was recovered and ready. I'm better on the hills than the flats, so I didn’t think it would be a problem. Wrong. Very wrong. Not only could I not attack, I let a small gap form. That gap got a little bit wider on the second climb. I did my best to bomb the hills and close, but was working alone by now. 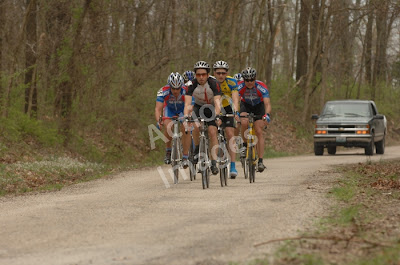 (Breakaway group, middle of second lap).
So in the end, I didn’t get to contest the sprint. If I had managed to hang in there, I have this suspicion that the results probably wouldn’t have been much different. I finished 6th overall. Results here. I think I will take this a good sign that coach Mike's training is paying off since the bike leg is my weak tri discipline! C.D. came in 10th after soloing a good portion of the second lap. I definitely worked harder on the first lap than anyone else in the break- so my legs were pretty fried. I like to think that all my work the first lap helped the break to succeed later on. But what do I know? I’m still a tic-tac-toe player amongst chess masters!
Posted by Sweet at Tuesday, April 03, 2007

Chris, unbelievable man!! Great job to you Chris D and Rossi. What a great experience for you guys...

Nice write up Sweet. I like the chess association. I'll definately have to work on my game for future races (we are doing more races aren't we?). cd

That is so cool. Very exciting read. Loved the first pic. Congrats.