In the 1980's -that glorious era of cinema- the quintessential sports film was perfected. Rocky is probably the best known example, but there were many others. All of them featured a underdog who after the required setbacks eventually goes on to win against all odds (and get the girl). One of my favorites in this genre was Vision Quest starring Matthew Modine. The film is probably best known as Madonna's video debut, but the plot focuses on Modine who plays an underdog wrestler who goes on a quest to drop enough weight to wrestle an undefeated champion. Parts drip with sappiness, but it is a really decent film all in all. During a voiceover as the film is ending, Modine's character gives us this gem: "all I ever settled for is that we're born to live and then to die, and... we got to do it alone, each in his own way. And I guess that's why we got to love those people who deserve it like there's no tomorrow. 'Cause when you get right down to it - there isn't."
Sappy? Yes. True? Yes. "Those people who deserve it" most certainly includes my Evotri teammates. It is a thing strange and wonderous to be part of a team that only gets together a few times a year. It's different -and yet similar- to being part of a team you train with almost every day. One thing it teaches you is to value the time you get together (because making fun of Stu in person is just so much more fufilling than over e-mail).
Last Thursday was the first opportunity for Team Evotri to meet up face to face. The usual suspects were all there, but our numbers were increased by one as we welcomed Charlie Parsiola as the newest member of the team. Charlie put together an awesome application video for the first Evotri contest and then backed it up with -literally- thousands of votes! Welcome aboard Charlie. 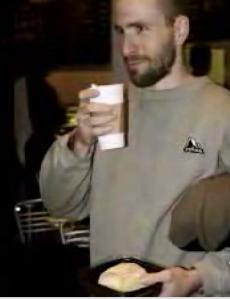 From the deep South and the Rocky mountains, from the Hoosier state and the cheesehead state we all converged in Chicago at Vision Quest Coaching Headquarters. This place is like triathlon nirvana. There were racks and racks of high-end tri and road bikes. There were enough Computrainers to make one weep for joy. The place was a hive of activity the entire time we were there. Testing and teambuilding was the order of the day. I've been around this sport a long time and feel like something of a role model to some of my more green teammates. To assist in their education, I demonstrated what I've learned about fueling for a tough workout by inhaling a monster cinnamon role and cappucino! That taken care of, we headed back to meet up with Robbie Ventura for a lactate test on the bike. 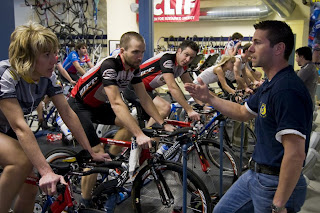 I've been hitting the bike workouts pretty hard for the last two months, so I was interested to see what this test would show. It was only the second time I've ever had a lactate test done. Michelle, Stu and myself all tested at the same time. Robbie and his staff were awesome at coordinating all the test data. The test starts with an easy warm-up then starts to go up 30 watts every 4 minutes until failure. At a certain point your body will start to produce more lactate than you can process. This is your lactate threshold and is an essential number for structuring

workouts and pacing races. The test starts pretty easy, but gets hard quick. Around 280 watts and I started to lack the necessary oxygen to antagonize Stu. Final numbers for my test was an LT of 258. The 310 watt interval was the one that did me in! A little low for where I want to be, but we are just starting two months worth of LT work that should take care of things.

After the bike we did a series of functional strength assessments. A barage of tests helped to determine if we needed to work on strength, stability or flexibility. Flexibility was easily my weakest. This series of tests was followed by lunch and a long discussion with Robbie of Vision Quest Coaching philosophy and power based training. 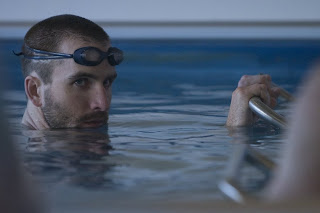 Last in the testing series was some swim stroke analysis in an Endless Pool. First let me say something about the Endless Pool. I've seen these things at the Ironman expos and always thought that they were just an expensive gimmick. Looking at the thing, I figured swimming against current would be detrimental to your stroke. I couldn't have been more wrong. The pool had a large mirror that you swam directly over. This was outstanding stroke feedback if you know what you are looking for. I was able to make tiny corrections from stroke to stroke by watching myself in the mirror. Swimming against the current really didn't change my stroke at all. So expensive- yes, gimmick- no. Furthering the analysis was some underwater taping and video feedback done right in the pool. If you ever have the chance, underwater taping is so much more beneficial than above water!
We spent what was left of the day talking to our coaches, taking some team pics and eating Chicago-style pizza!! On the business side of things we discussed the last two contests that will determine the final members of Team Evotri for this season. Contest #2 is in full-swing. If you want a shot at becoming a fully-sponsored age grouper get your blog post up and send us the link! Full contest details are here! 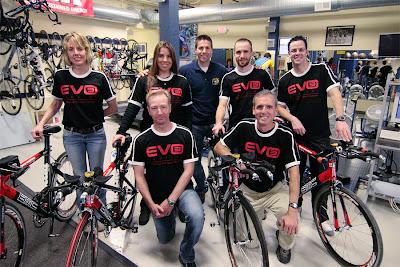 It was totally cool to see you again! Great re-cap of the day, I'm totally going to have to go rent that movie now :)

Great post! I had such a blast in Chicago - can't wait for WIBA!

You had me at Vision Quest (Movie). I love the movie.... I still watch it to this day.