We're still averaging well below freezing here in Illinois, but the tri season is starting to pick up! I like to keep my posts focused and discrete, but there is just to much going on right now for that to work! I'm going to jump right in and give you a run-down of what's been going on the last few weeks.

Big news is that we are in the final round of voting for the newest member of Team Evotri. As a current team member I had the unenviable job of watching all the video submissions and then having to narrow those down to just the top ten. This was not a fun task- let me tell you! There were many worthy submissions. Well the top 10 got narrowed to 7 and then 7 to 4. If you want to do your democratic triathlon duty then get on over to http://www.evotri.com/ to check out the final four and cast your vote!

Next up is a pair of tri "camps". The first is a one day affair at the Vision Quest Coaching Headquarters in Chicago. This will actually be the first time all of the Evotri team members have had a chance to get together as a team. I am so looking forward to this! It is one thing to communicate by phone, e-mail and blog, but I love every opportunity I have to get together with these great peeps! We'll be doing some testing, taking some pics, and maybe, just maybe meeting the newest team member. Did I mention you should go vote?

Second camp-related item is my new Triathlete Factory Camp endeavor. This will be a new 2.5 day tri camp near Peoria, IL. We've had a decent response, but the camp is far from full. Beginners are definitely encouraged as that seems to be our primary demographic so far. Hot off the presses is news that VQ Coach Stan a USA Cycling Level 1 coach will be joining us to help out for one day of the camp! It's gonna be a great weekend! 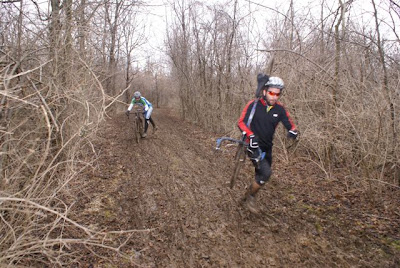 Since January I've been ramping up the training and getting some fitness back. I haven't done any racing up until 2 weekends ago when I traveled down south near Springfield, Illinois for the Tour de Groundhog Cyclocross race. I'm quickly becoming a huge cross fan since it combines off-road riding and running. Last year I posted this awesome video of our crazy local "Re-cyclocross" race series that is held at a wood recyling plant here in town. Well the Tour de Groundhog was my debut outside of the local races. I was hoping to test my cycling legs against some of the better area cross racers, but as conditions deteriorated I have to admit that it was my running legs that really got me through this race! The weekend gave us a brief respite from the frigid temps and turned all the tundra to muck. We're talking sticky, gooey, Illinois clay. You had to carry your bike because if you pushed it the wheels would lock up from the mud. I ended up running -no exaggeration- about 1/2 of each 1.3 mile loop. Fortunately, there weren't a lot of runners in the prize money race and I ended up placing 4th overall. I was sadistic enough to enter the next race immediately following and improved to a 2nd overall finish. Now I like running and all, but I actually ended up with a bruise on my hip from where my bike rubbed while I was running with it! I'm hoping for a bit more riding in the next cross race! More great pics and results are here: http://www.teammackracing.org/ 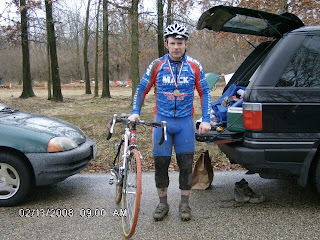 Last -and probably most importantly- this race represented a return to racing for my new VQ teammate Steve Driscoll. If you read his blog you'll notice he whines quite a bit about a small encounter with a car while biking a couple years back. Well after a handful of surgeries and a few measley years of rehab he is mostly better -minus some whining- and is back to racing! Not only that, but he re-debuted in fine style, winning the Masters 30+ race! Way to go Steve!

Finally, Kona seems like such a long way off, but qualifying a year in advance not only gives me a leg up in training, but travel planning as well. Case in point, I can beat out all the other psycho-organized type A peeps who are already scheduling their Kona trips down to the second. Me personally, I hate, loathe and detest all this planning crap. I want to go there, relax for a bit, then race. Period. I suck at all this planning stuff. I did make some progress by booking plane tickets last week. Cara, Jonah and I will be on the big Island for the week before the race and two days after. I got tickets for what everyone tells me is a good deal. I figure one of my kidneys on the black market should about cover the cost. Anybody know if you need two kidneys to race an Ironman?
Posted by Sweet at Wednesday, February 27, 2008

whines, quit a bit? Heck, you should have seen me whining when I was in the squeal (wheel) chair, now that was some whining. A++++ if I was rated on e-bay, or "would do business agin" that kind of whining

Great racing out there Sweetie, you run like a butterfly, and sting like a manatee. ( I made that up, in case you didnt know)

VQ withdrawls do that to you, make you crazy!

Ouch yep I bet those tickets set you back a bit. Once you're there you won't be thinking about that for a second though. Looking forward to seeing you in Chi-town!