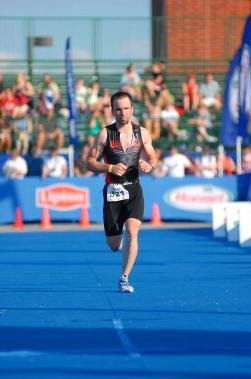 If you scroll down to my last "Plague of Du's" post you will find all the relevant prologue material to this race report. Since I've already set the stage so to speak, I will jump right into the race report.
When I saw that Hy-Vee was going to be the race that determined the last Olympic slot, I knew I had to get over there since the age-group competition would also be top-notch. The amateur race covered some of the same course as the ITU event and shared the same transitions and finish line. Hy-Vee went all out for this event both in terms of prize money and race organization. Race schwag was unreal and included two hats, a custom bike jersey, a custom messenger bag and a T-Shirt. I would have preferred a reduction in the stupidly expensive entry fee personally, but still a ridiculous amount of schwag!
On race morning, no one was allowed to take their bikes out of transition- due to logistics I'm guessing. I made due with a short run warm-up and then a little bit of a swim before they pulled us out of the water for the start. The lake was definitely flooded, but was actually a fine place to hold a race. The first corner came way too soon, but I started wide and got out fast, so had no problems there. Like usual, I've been doing very little swimming and didn't know what to expect. I didn't have my top-end speed, but I was very comfortable and relaxed in the water. The water was a reasonable temp (mid-70s), so I wasn't overheating in my sleevless wetsuit (wetsuit legal swims near the 78 degree cutoff are one of my triathlon pet peeves). I came out of the water in 23:10 and figure the course was probably fairly accurate. 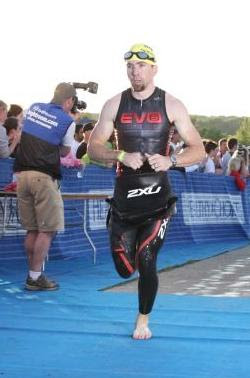 Sharp new EvoTri Team Jersey!
When the entire race got moved to a new location due to the flooding I was concerned about riding a screwy, cobbled together bike course. In reality, the organizers stepped up again and put together a pretty nice bike course. The course had one good climb (maybe 3/4 of a mile long?) a few rollers, quite a few turns and less flats than you would have guessed for Iowa! The one long out and back section was a false flat into a headwind that definitely caused some suffering! About 5 minutes into the bike, things started to click. Usually I am just plain miserable on the bike for short course racing. I like to ease into the bike for a half hour or so and then get after it. Obviously this doesn't work for short course! Power-wise my goal was to be riding around 280 watts on the flat sections. My threshold is currently somewhere in the 280-290 range, so when you average in some hills and coasting my goal wattage was an ambitious 270 watts. During most of this race I was able to ride more like a pure time trial than bike leg of a triathlon. Legs were feeling good and there was quite a bit of time were I actually felt almost comfortable at race pace. Almost. A good sign for longer races to come is that I didn't fall off pace too much. I actually felt pretty strong coming in. Another good sign is that no one from my wave passed me during the bike. The eventual winner -Mark Harms- did pass me on the bike FROM THE WAVE BEHIND! This means two things: #1 I'm riding short course somewhat better and #2 the guys in my age group that did out-ride me, also out-swam me! I finished the ride in 1:03 and change, but this is misleading since my computer had the course at about 25.3 instead of 24.8. My best average speed ever at 23.9 mph and average watts came in at 260. To put that in perspective, I went under an hour at Memphis in May last year, but averaged less watts. Good stuff! Stay tuned to find out what these numbers translate to for Steelhead 70.3 in August. 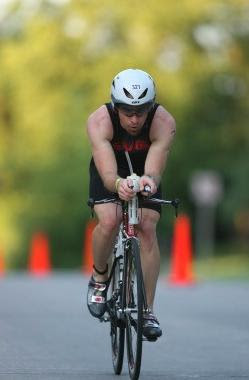 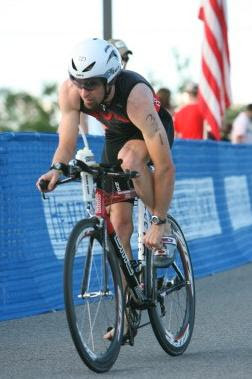 I headed out on the run knowing that I just had my best Olympic distance bike ride. I was happy with that and not sure what would be left in the legs for another 10K. This was my only other "A" race this season other than Kona, so I didn't worry about how hard I just rode and got after the run right out of the gate. I saw Cara and Jonah for the first time soon after T2. Jonah's first time spectating at a triathlon! I had to turn in a good run now! My legs were feeling decent, but lacking top-end turnover (no big surprise there). The run had a number of out and back sections that let me see the competition. I was having a good day, but this race was stacked. There were quite a few athletes from my 29 and under wave ahead of me. I got to work trying to pick off a couple as best I could. Like the bike, I think I was only passed once during the run. We were fairly strung out though and I don't think I made up more than 4 0r 5 places. The run actually had a couple decent hills in it to keep everyone honest (some of the same hills that the ITU bike course went over). Temps stayed reasonable throughout the run (thanks to the ungodly early 6am start!). Run time was a really solid 37:10. I can improve on that, but not by a whole lot! 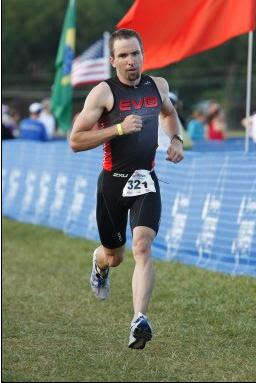 Coming into the finish was on par with great events like Wildflower and the North America Ironman events. Everything was all decked out in blue carpet for the ITU race. There must have been something like a quarter mile of carpet! There were huge grandstands and a jumbotron screen. Very, very cool finish line. 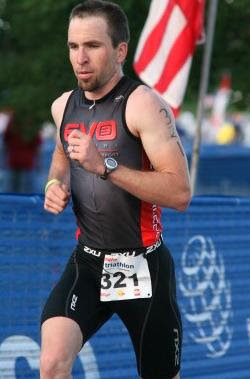 At the end of the day I finished 22nd overall with a 2:06:26. I took 5th in the 25-29 age group. The time was a bit disappointing until I saw the bike course was a bit long. That plus the long transitions slowed all the times down. 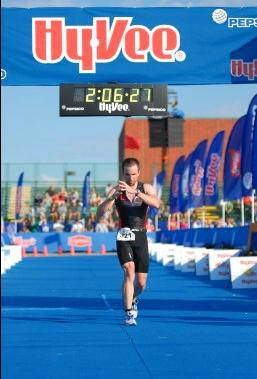 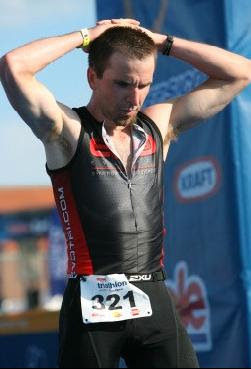 Racing strong at Hy-Vee was one of the important benchmarks I wanted to reach on my way to Kona. The first benchmark of the year was starting the spring tri season as strong on the bike as I finished last year.
Check and check!
Posted by Sweet at Monday, June 30, 2008

I race against Mark Harms in a couple races around here. I can stay with him on the swim, but after that he's gone.

Way to go..that is a blazing bike split!

Nice job out there, Chris!! I was going to say "crazy fast bike time," and then I was thinking, "crazy fast swim," and your run was smoking too, so I'll just say NICE JOB ALL AROUND!

And thanks for the bike clinic on Sunday. I was in-and-out, but I learned a lot about adjusting my derailleurs (I have a pic on my blog of your ass...)

See you at Steelhead!

Nice...Can't wait to see what you can do at Steelhead and KONA!

Man, those pictures are awesome. You look great!

Awesome race!! Holy smokes, those are cool pics. You're definitely in the zone! Nicely done!