A plague of du's

I was pretty excited to compete in my first duathlon a few weeks back (see last post). A nice, short du seemed like the perfect lead-up to tri season proper. That race served its purpose and was even somewhat enjoyable. BUT, triathlon is really my thing. I'm not really buying into this whole run twice concept!

After the Hopedale du, I was pretty psyched for our local Tri-Shark Classic race that my club helps to put on. It is one of the earliest races in Illinois and always brings out top-notch competition. Well, this year it also brought out the storms. My Evotri teammate Michelle, made the drive down all the way from northern Wisconsin to do the race. Race morning did not look promising with some serious storm clouds rolling in. After postponing the race twice because of lightning, our race management team made the decision to turn the race into a duathlon! I made the best of the situation and raced hard for a 4th place overall finish. 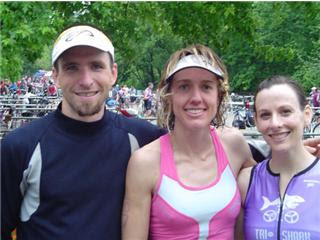 I have two "A" events this season. Kona (obviously) and the Hy-Vee Triathlon in Des Moines. So as it happens, Des Moines has been in the news, but not because of the triathlon! Flooding. Lots of flooding. Bring out the National Guard sort of stuff. So guess what? A little more than a week out from the race the competitors get an e-mail saying the entire race had to be moved and would now be a DUATHLON! Great, my "A" event is now a duathlon, but not only that, my 3rd duathlon in a row! A plague of du's. I enjoy racing and all, but I think it is in my best interest to actually do some triathlons to get ready for an Ironman. This in mind I started looking around for alternate events and found the Tour of Carroll County bike race. This was a 62 mile hilly bike race that sounded like some excellent training! Unfortunately, I couldn't find anyone else that was willing to go to the race on oh, I don't know, about 12 hours notice (it's called spontaniety peeps!). I instead opted to go over to my brothers for a little barbecue and a few beverages. Around 8pm my brother gets a text from one Mr. Kelley- a local cyclist. A phone call between us ends in, "OK I'm going to stop drinking now and meet you at 4:30am to drive to the race."

So last weekend I went up to Northwest Illinois for the Tour of Carroll County. I raced in the Cat 4/5 race which looked like it had about 40 people or so. I tend to do better in the hills than flats so the first part of this race went really well for me. Within the hilly first hour we had cut the lead group to around 20. Most of this remaining group stayed together for the whole race (it was windy and the attacks were all ridden down). I was feeling excellent and ready to unleash my triathlon sprinting skillz (which is to say increasing my time trial speed by 1 mph). In all the other bike races I've done there are nice, big signs letting you know you are a mile out, 800 meters, 400 meters, etc. As we were picking up speed I was looking for those signs to start when I saw two little cones that "marked" the finish. Our whole group was over the finish before I even got a half decent sprint in. I took 7th and learned a good lesson about positioning in a large field sprint.

So come Tuesday or Wednesday of this last week, I get another e-mail that says "Guess what the lake is still flooded, but the bacteria count is now safe, so Hy-Vee is back to being a triathlon." Now, it took some fancy negotiating with the wife for me to be allowed to do the unscheduled bike race in the first place- the main negotiating chip being "I'll skip the Hy-Vee duathlon". Needless to say, wife was not thrilled about the prospect of entertaining 8 month old baby all alone for another weekend. After much debate a compromise of wife running a Saturday morning 3 mile road race (big PR by the way) and then wife and baby coming with husband to triathlon in flooded state was reached.


So I guess that is actually the introduction to my Hy-Vee race report. To avoid an unreadable, epic-length post I will save the actual race report for another day!
Posted by Sweet at Monday, June 23, 2008

WOW. OK by far my favorite line here was, "the phone call ended with "OK, I'm going to stop drinking now and meet you at 4:30 am to drive to the race." I love it. That's what it's all about... can't wait to read the report!