Steelhead and the Great Periodization Experiment

Last year Steelhead was my last big test before heading into Ironman Wisconsin. It helped to determine if all the hard work, the team coaching and the fancy gear would add up to a substantial time drop. It did. That race went quite well and I turned in my fastest time on an accurate half-ironman course (inaccurate 1/2 IM courses are another story!).


This year Steelhead was also a test of my somewhat untraditional training structure for this season. After last season, I really bought into the concept of non-traditional periodization. The structure of my season is somewhat based off this great article. In traditional periodization you do your base/LSD first to lay the aerobic foundations. Next you build strength and speed, then peak and taper. This method is firmly rooted in solid exercise physiology, but it also has some shortcomings. Briefly, my training this year has been structured like this: lots of high intensity bike intervals from Feb-May while doing traditional LSD on the run. Come late spring and I started doing some run intensity. I didn't really start doing any long endurance rides until after Hyvee in July. Swim is fairly static since I don't know anyone that likes to do swimming base! This program was designed to accomplish a number of personal goals (better power on the bike and low mileage / high quality running). It also takes seasonal conditions into consideration: i.e. early spring in Illinois is a lousy time to do long rides!


My race schedule was designed to mimic this training structure with only shorter events all spring and early summer. The goal was to help build speed/power by focusing on short races which are more difficult for me. So Steelhead in August was my first long-course race in a season that will culminate with one of the most difficult long-course races. Risky? Maybe a bit, but it all makes a lot of sense when you think about it. 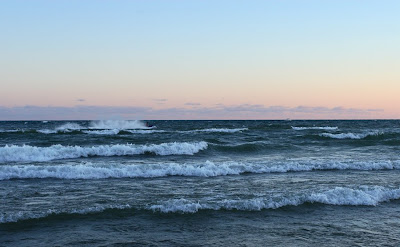 So how did things pan out? As most people have heard, Steelhead this year was a duathlon due to a few waves in Lake Michigan. Funny thing is that I did this race the first year before it became a 70.3. As I recall the waves were just as bad, but the participant numbers much more reasonable. No one even considered cancelling the swim that day. I've got a good rant in mind here, but will save it for another post! My year of the du actually paid off somewhat since I recalled how much it sucked to try and ride hard after running 2 miles hard at Tri-Shark. I ran a comfortable and controlled first run figuring I couldn't lose much time in 2 miles!


Heading out on the bike I just felt amazing. Usually it takes me a good 30-45 minutes to start feeling good on the bike. From the start I was riding above my specified power zones for this race. Had it been a more important race, I might have backed down, which as it turns out would have been a mistake. Rather than staying within my prescribed numbers I thought, what the hell let's see what happens! I can't figure out how the Steelhead course is so fast. It's definitely not flat and it definitely wasn't still. What helps is that there are long, straight stretches. Bike courses like IM WI are difficult in part, because of all the corners. I should mention that my age group went dead last. That meant I had the majority of 2000 other athletes to get around during the bike. The course was way too crowded and way too many people completely neglected to follow any of the USAT rules (yet another rant in the making). My ride continued to go well. I was seeing power numbers similar to an Olympic distance race. I got down 600 calories (2 bottles of Infinit and one gel) which seemed about right nutrition-wise. I fell off pace a bit in the last third, but nothing catastrophic. I had no idea how well I had ridden until I got home and looked at the Powertap files. 24.9 mph and 241 watts. Last year's Steelhead was 23 something and 220 watts! Game on, peeps! Funky training plan is working. 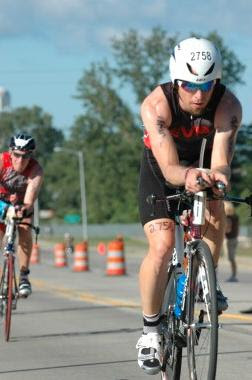 I knew I had ridden well and was pretty happy with that. In the back of my mind I was wondering if I was just going to have a terrible run in retribution for such a fast ride. My plan was to take the first half of the run at a quick, but comfortable pace and then re-assess at the halfway point. I felt ok -but not great- for most of the run. I was able to pick it up in the second half, but not as much as I had hoped. With so many waves ahead of me, I had no idea where I was in relation to my age group or rest of the field (one of the reasons I love mass-start IM races so much!). Run time was just under 1:26. Minute and change slower than last year, but still way faster when you figure in the bike split. At the end of the day I was 16th overall and 2nd in my age group. Very solid showing for me at a big event. 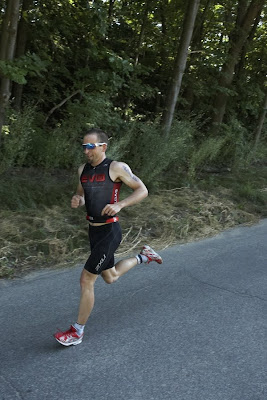 Steelhead was one of our Evotri team events meaning the whole crew was in town and ready to race. The one advantage to starting in the last wave is that I got to see almost everyone a couple of times out on the course. Michelle is looking absolutely rock-solid for IM WI. Because of all the different waves when I passed her I wasn't sure what lap she was on (she was running like it was her first). As she clarified it was her second. Her strong run and stellar bike were enough to secure a slot for the World Championships in Clearwater! New teammate JP also had a super-solid effort leading into his IM debut at Wisconsin. 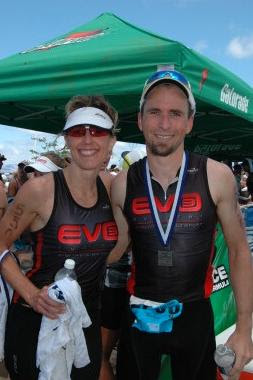 Right now, I'm heading into what should be my biggest training week ever, then one more 1/2 IM at the beginning of Sept.

Solid race, Chris. I'm so excited for your Kona debut!
I agree, one of the best parts of the race for me was seeing everyone on the run.