I Made the Leap (SRAM Red Review)

In a quest to get the BMC Time Machine into tip-top shape prior to heading out to the big island, I've been gluing on new tires, replacing cables and checking torque on all the important bits and pieces. The real news though, is that 2008 Team Evotri sponsor SRAM came through big time with a brand-new SRAM Red tri groupset!
For those who don't read the cycling news websites every day, you might have missed the important bit of industry news where Zipp was acquired by SRAM this spring. Zipp has been a big supporter of the team and it was awesome that SRAM was also willing to come on board and keep everything "in the family" so to speak!
I like SRAM so much because I have some faith in the concept a free market economy (how's that for making a leap?). To make some sense out of my ramblings you need to know a bit about the history of bicycle component manufacturers. A long time ago, in a land far, far, away cyclists had much greater choice as to what bits and pieces went onto their machines. My first racing bike came with Suntour components, but companies like Sachs and Mavic were also significant players in the component game. For a variety of reasons having to do with who owned what patents and who actually had a sustainable business model, Shimano and Campagnolo came out on top and pretty much dominated groupsets throughout the 80s and 90s. Shimano does well in North America (and also makes some killer fishing reels) and Campy has a bigger piece of the European market. This is all well and good, but that free market thing I mentioned tends to thrive on competition. I think innovation suffered for a number of years while Shimano and Campy were content to dominate their respective markets without any real challengers.
Enter SRAM. To make a long story short, SRAM acquired Sachs and had great success with a simple product called the Grip Shift for mountain bikes. In recent years we saw SRAM make small forays into the road market with chains and cassettes. It wasn't until they stormed onto the scene in 2006 with full road groups (Force and Rival) that people really sat up and started to take notice. Their DoubleTap shift levers in particular were much simpler internally than the competition and offered better functionality. Both of these groups got rave reviews, were ridden in the Tour and quickly became spec'd on some stock bikes (3 things that really got Shimano and Campy's attention).

SRAM's real ace-in-the-hole was the Red group. While Force was a solid contender with both Dura-Ace and Record in terms of weight and performance, it was the new top-end Red grouppo that sent everyone else back to the drawing boards.

Thanks for allowing me to indulge in two of my favorite pasttimes: cycling and history! I do think it helps to have a little background knowledge to understand why people are so excited about this SRAM stuff.

To get back to my BMC upgrade, I stripped all the old components off right after Steelhead. I've now got more than a month and more than 1,000 miles on the new parts, so I feel I can offer up a small, well-informed, review.

No question the aesthetics of these shifters is top-notch. One nice feature not apparent from the pictures is that there are fewer parts to these than a Dura-Ace bar end shifter set. Good news for you home mechanics! Combined with the Red rear derailleur I would say the shifting is more positive than Dura-Ace: each shift is very solid. The carbon levers look great and save some weight, but I'm not sure how they'd hold up in a crash, or even accidental drop. One feature that I miss is the ability to switch to friction mode. This has come in handy more than once when shifting problems have come up mid-race or mid-ride. On the flip side, not having this extra non-essential piece is in-line with the SRAM philosophy of simplification (less parts, better durability, lower weight).

Rather than belabour you with the minutia of each drivetrain piece I will just write a few words about how everything works together. Ceramic bearings have been all the rage among weight weenies and bike techies. I've never been convinced that these upgrades are worth the price tag. SRAM Red was the first grouppo to offer ceramic bearings as standard equipment. Both the external bottom bracket and rear derailleur pulleys utilize ceramic bearings. Just playing with these pieces before they were installed, I thought they were smooth, but not noticably more so than standard bearings. As soon as I started my first ride with the new stuff, I have to admit everything was smoother. Granted the Dura-Ace stuff I took off had lots of miles on it and had been raced in too many rainstorms this year, but there was a definite, noticable difference. Beyond that, the derailleurs were easy to install and adjust. As noted above, the shifting is very strong and solid. I believe the rear derailleur spring is stronger than Dura-Ace, which helps with nice crisp shifting. I think it is a toss-up for most innovative pieces between the double-tap shifters and the rear cassette. Cassettes haven't changed much since the change-over from freewheels. SRAM's approach to the Red cassette is entirely new. They start with a solid chunk of steel and do about an hours worth of material removal to come up with a hollow cassette made entirely of steel, which when nickel plated is much more durable than the titanium that Dura-Ace uses. The hollow design means the whole thing is also lighter than a Dura-Ace cassette. This is definitely my favorite piece of the tri group. Below is a picture that shows some of the cassette machining process. 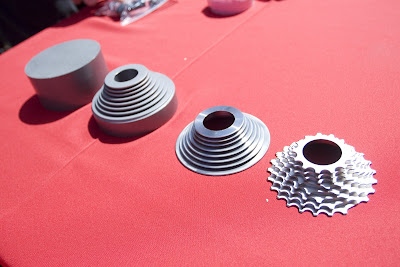 An object in motion tends to stay in motion, therefore brake design of a top-end group has to be at or above the standards of the rest of the group. The Sram Red brakeset again betters Dura-Ace and Record by a few grams. The good news is that it doesn't do it by sacrificing stopping power like some other ultra-light aftermarket brakes. The Red brakes have a centering screw which is very important to me since I switch between race wheels and training wheels all the time (I don't believe Force and Rival have this screw?). My brakes came equipped with high-end yellow SwissStop carbon brake pads. The pads actually performed great on aluminum rims, but I got some squeal on my Zipps. More than likely this is due to me not taking the time to set proper toe-in, but I am still switching back to Zipp brake pads for Kona.

Lastly, I consider functionality and performance as the most important criteria when selecting bikes and components. So I take it as a nice finge benefit that the SRAM Red components just look so awesome on the BMC! The color scheme is the same and BMC also uses a bold graphic design similar to what is on the Red cranks. Never hurts to look good when you're tearing it up! Sram hit a homerun with the Red group and struck some serious fear into Shimano and Sram. Still you get what you pay for. Weight-wise the Force grouppo is only about 150 grams heavier than Red. The new models of Force and Rival get trickle-down technology from Red, so other than the minor weight penalty there shouldn't be much in step-down in functionality/peformance. If you have to have the best, that is Red, but I'd have to say it is unlikely that anyone would lose a race because they were using Force and not Red!

Whenever a sponsored athlete sings the praises of some company product, I am pretty skeptical. Fair enough, don't take my word for it. Check out a few other glowing reviews:

I want to upgrade to Red so bad...but alas the budget is prolly only gonna allow Rival or maybe Force...

I found this site using [url=http://google.com]google.com[/url] And i want to thank you for your work. You have done really very good site. Great work, great site! Thank you!