My last post recounted the many obstacles I faced this tri season and coming into this race in particular. I don't want to dwell on all the stuff that kept me away from training this year. Looking back, despite all the challenges, I still managed to win a couple small races. I raced very well in Decatur and then again when it mattered at Steelhead.

As a high school runner, I probably fell into the category of a great workout runner, but so-so on race day. I've learned a lot in the intervening years and now I am on the opposite end of the spectrum. In short, my wife says that I have extra race-day gears. I've gotten to the point where I can peak for a couple "A" events each year with or without solid training. Of course, if I can log the training miles, the race-day performance is that much better. Still, (to put it bluntly) I've mastered the fine art of pulling a good race out of my ass.

That pretty much sums up my day at Clearwater. I had lots of things going against me come race day. Having this as my "A" event for the year was really the only trick up my sleeve.

I flew out of Bloomington on Thursday for the race on Sat. I fly once or twice a year and always seem to have wretched luck with flights. I was on an AirTran flight connecting to Atlanta. About 30 minutes into the flight there was a really loud clunk which kind of sounded like landing gear to me. Pretty soon the pilot comes on and informs us that one of our engines was dead, but not to worry because the plane could still fly on one. Just to be safe, though we were re-routing to St. Louis where emergency crews would be waiting for us. Just to be safe.

The only notable pre-race happening was that they moved the swim from a more open part of the Gulf to a calm, shallow bay. The remnants of Hurricane Ida had kicked up some pretty good swells leading up to race day. The waves were deemed unsafe -even for a world championship- so we were moved into the bay. Along with the change in swim start was an announcement that the age group race was going to be a time trial start rather than just big age group waves. I thought this would be an ideal way to help string out some of the big packs on the bike. It would have helped if they had kept enough spacing between athletes, but as it turned out the time trial start actually compressed everyone more than usual.

My swim was quite uneventful. The water was nice and cold, which I prefer. There were some very shallow spots on the swim where people were standing up and doing dolphin dives. I swam directly into the sun for a 1/4 mile or so and literally could not see a thing. I just hoped those ahead of me could see the buoys. There was a narrow set of stairs leading out of the swim where I encountered my first bottleneck of the day. I hit the stairs in about 29 minutes, but it took me about 45 seconds before I actually made it out of the water and on to transition. Clock time was 30 minutes-something, an average swim for me these days.

The couple of days leading up to the race were relatively cool and overcast, but on race day it was crystal clear with temps on the rise. I didn't get much in the way of really long rides in this fall, but the cycling had still been going pretty well. I knew this is where I could really make up some time.

Let's address the drafting issues at Clearwater quickly since this is discussed ad naseum in various forums every year. First off, they just let too many people into these races. If there were less people on the course, there would be less drafting. The downside is that you probably couldn't afford to put a race like this on in a big city like Clearwater if the numbers were significantly fewer. Next, a time trial start with good spacing would really help spread things out. Everyone has to qualify for this race, which means that the majority of people in a given wave will finish in a narrow time frame. Next up, when people talk about drafting in Clearwater, they usually neglect to mention that much of the course is held on 2 or 3 lane highways with one lane blocked off for bikes. Everyone gets a "legal" draft from these cars (this happens at the Chicago Tri as well). Next, if you sit the legal distance of 7 meters off the back of a big pack like I did for some of the race, you still get some draft benefits. Not as much as riding illegaly in the pack, of course! Last, this course is just plain fast without drafting. The roads are in excellent condition, there are no hills to speak of, and there are very long straight stretches. By the end of the weekend I was almost as frustrated with the people complaining about the drafting as the people that were doing it. Almost. When it is all said and done, it is like anything else in life: you have to take responsibility for your own actions. I got dinged for taking too long to pass in Kona. I have to own that. I rode as cleanly as possible in Clearwater. I'll own that too.

The first 10 miles of my ride was very crowded. There were definitely times where I was either drafting, or blocking because there were huge lines of bikes with no gaps in between. After 10 miles though, things started to thin out and it was possible to ride legally most of the time. For much of my race I was sitting off the back of a big ole peloton of about 20-25 people. Every now and then I would get sufficiently ticked to spike my power up to 350 watts for about a minute to get around the pack. It was funny because you could tell that some people in the pack just thought someone else was going to take a turn at the front. Instead, when I got to the front, I stood up and hammered for about 10 seconds to open a good gap. Inevitably the pack would go around me again in a mile or two though.

The best part of the bike ride is when I got to see dolphins off of one of the long bridge sections. Of course, I had to mentally counterbalance this with the jackass in the peloton that chucked a water bottle over the side of the bridge. I'm usually not one to judge, but if you are drafting and you throw a bottle into the ocean then you are pretty much the spawn of satan.

I had my best ride ever at this distance: 2:12, which is about 25 mph. I knew I would need this cushion if I wanted to PR. About 3 weeks out from the race I did a little duathlon as a training race. I won the race, but had a minor calf strain that got progressively worse. I was doing massage, ultrasound and no running in the 10 days leading up to the race. My calf was fine on the bike and started out ok on the run. About 1.5 miles into the run you hit a pretty steep bridge crossing which I knew would put some strain on the calf. Sure enough, my right calf pulled again about 1/2 way up the bridge. I hobbled a bit and started thinking about how much an 11 mile walk was going to suck. I didn't want to tear the muscle which would require surgery to fix. I started trying to just run on it to see how it would hold up. The pain was tolerable and didn't seem to be getting worse. Only thing was I couldn't really toe-off and stride out. I switched to a really quick and compact turnover. I actually had on double compression socks to give the leg a fighting chance (2XU compression sleeves that I wore under my wetsuit and then 2XU compression socks over that for the bike and run). I know the socks helped somewhat. In any case, it was frustating getting passed by so many people in what is usually my strong event, but my leg held out. I even got to pass last year's champion (Terrenzo Bozzone) on my first lap. He was on his second lap, but having a pretty rough go of it at that point! I finished in 4:17 which is about a 6 minute PR for me. My run was almost 1:28. Prior to the calf injury I had some great workouts with the Illinois Wesleyan Cross Country Team, so a run split around 1:20 was not out of the question. Still a PR is a PR. Very happy with my season all in all.

I didn't take a camera on the trip, so I have almost no pictures.
Here is a shot of me and Starky after my finish (he had been done awhile!) 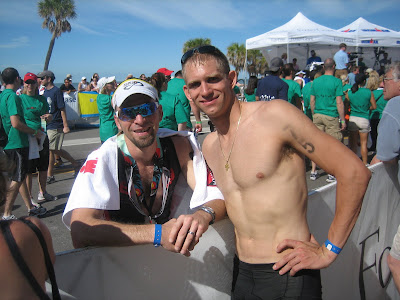 Here is the link to the official race photos which I won't be buying because it is a racket.

Inside Tri had a nice set of photos from the race.

Thanks again to Andrew and his mom for letting me stay with them over the weekend!

Great race Sweet! It's amazing you can compete that well without the ideal training season you would like. 2:12 is friggen fast on the bike! Keep up the great work!

Hi, it's a very great blog.
I could tell how much efforts you've taken on it.
Keep doing!