How dull it is to pause, to make an end. To rust unburnished, not to shine in use!
As though to breathe were life! . . .

Though much is taken, much abides; and though
We are not now that strength which in old days
Moved earth and heaven, that which we are, we are---
One equal temper of heroic hearts,
Made weak by time and fate, but strong in will
To strive, to seek, to find, and not to yield.

Portions of this great Tennyson poem have been lodged in my brain during workouts the last few weeks.  In the full poem (linked above) Tennyson is imagining a Ulysses many years after Homer finishes with him in the Odyssey. As Homer leaves things, Ulysses returns home to his kingdom in Ithaca after a world tour that includes fighting lots of epic battles and slaying monsters. He finds his palace overun with would-be suitors for his wife's hand in marriage and he dispatches with them in fine style.  We are left to assume that he goes on to live happily ever after.  In the 19th Century, Tennyson's poem envisions an older, restless Ulyssess. You can almost imagine Ulysses as the poster child for A.D.D.  After kicking butt in the Trojan war and hob-nobbing with the gods, sitting around the palace eating gyros and drinking wine can get real boring real fast!

One characteristic of great literature is univeral appeal. Certain themes (love, death, heroism, betrayal, good vs. evil, etc.) can be understood by anyone at anytime.  So it is that hardly a year goes by without a major Hollywood re-make of a Shakespeare play. Therefore, I feel it is perfectly appropriate to use a 19th century poem about a 700 B.C. epic to help understand my own athletic endeavors in the 21st century!

The restlessness is the main thing that draws me to this poem.  Last season was the first in a very long time that I did not have a big goal race on the horizon. I raced ok, but mostly I just went through the motions. My family and my job are very legitimate priorities that I continue to juggle along with training. This winter, I took a hard look at returning to Ironman racing but it just wasn't in the cards with my current commitments and a new addition to the family on the way in June. 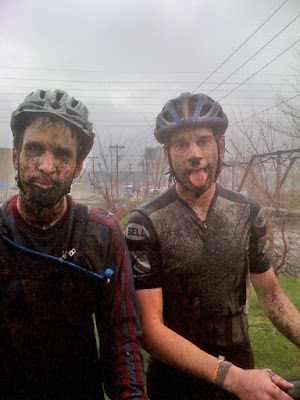 ﻿
Enter Xterra! Xterra off-road triathlons are something I have dabbled in over the years and have really enjoyed every time I've done one.  I've often said that if I lived near actual mountains I would probably only mountain bike and race off-road tris.  Two years ago before Jonah broke his leg, I was all set to make a run at the Xterra Series, but had to put that on hold.  The Xterra Series has really been growing the past few years, but there is still only 1 race in Illinois and about a half-dozen in the midwest. Having raced the Ironman and Half Ironman World Championships, I am really drawn to taking a stab at the Xterra World Champs in Maui.  Planning a racing season around a new baby in June is quite tricky, but that is another reason that I am looking to Xterra in 2011.  I have put together a rather ambitious, but logical plan for the year.  Essentially, my plan has me doing some crash course training to get into peak fitness by the Xterra West Championship race in Las Vegas on April 10. Cara's parents live out in Vegas, so travel should be cheap with free lodging!  Assuming this plan of action works and I mangage to qualify for the World Championships, that gives me the flexibility to take some time away from training before and after our new arrival.  The Worlds aren't until the end of October, so I can start re-building mid-summer to peak in late fall!  Like I said, ambitious....

Outside of the bold 3 month time frame, the other major hurdle is that there are essentially no midwest mountain bike races prior to the Championship race in April.  I'm going to rely heavily here on my fall cyclocross racing for maintaining some handling skills and try to supplement this with a little mountain biking while our local trails are still frozen (they are unridable during the spring thaw).  Toss in a couple trail races and (in theory) I will be ready to rock it in April!  Below is my ideal 2011 race schedule that is heavy on Xterra and MTB racing.  You know what they say about the best laid plans of mice and men, though...

Awesome goals Chris! I'm sure that you'll achieve them and I'm looking forward to reading all about the races. My husband is working on getting me into mountain biking so maybe someday I'll try an XTERRA race! Good luck and congrats on the new addition!

Fabulous goals, Sweet! Excited to root you on this year! And congrats on adding a little pink to your house. :) Looks like you're gonna have one memorable year!

Xterra rocks! I have taken a break form racing them-but spend all winter on my mountain bike. Makes one strong and mentally tough!
Championship races are HARD (they were for me)-and so I didn't go to Maui even tho I qualified. (I just couldn't imagine anything more difficult than the course in Utah!)
No doubt you will reach your goals however! Best of luck!