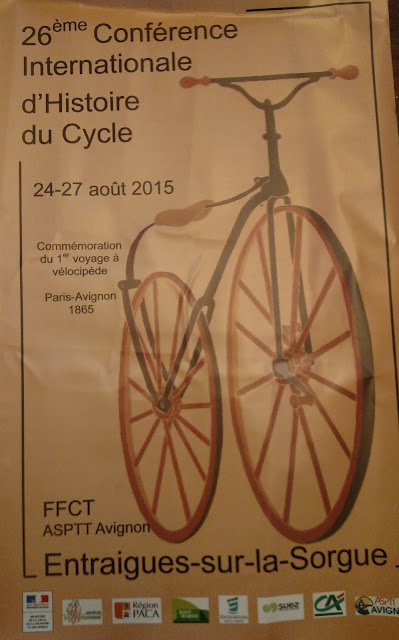 As I've mentioned before, this fall semester is my first-ever sabbatical at Illinois Wesleyan University. Some of my non-academic friends thought that this meant I just didn't have to work for about half a year! To the contrary, any sabbatical project proposal must be approved by a committee of my peers at the university and then I sign an additional contract that specifies what I will accomplish during a semester away from teaching and committee meetings. My project which I introduced here, is to eventually write a book covering the history of cycling in Illinois.

As it turns out, there is exactly one academic conference per year that focuses on the history of cycling: The International Cycling History Conference (abbreviated ICHC). This conference has been around since the early 90's and brings together a wonderfully diverse group of bicycle history nuts.  The mix includes historians, museum curators, collectors, and a few students. I found the diversity of backgrounds and countries represented to be wonderfully refreshing compared to the domestic library conferences I attend every year. For the most part, I a have been tackling this new line of research in isolation since it is such a specific area of study.  Going to this conference put me in contact with most of the major authors writing in the area of bicycle history.

This spring I saw that the ICHC would be in a small town (Entraigues Sur-la-Sorgue) in southern France at the end of August. Normally it would be impossible for me to miss the first week of classes at Wesleyan, but my sabbatical gave me the flexibility to travel during this timeframe.  Well, more specifically, my sabbatical and major support from my wife who agreed to let me go to France during the first week and a half of a new school year which is incredibly hectic with two young kids (thanks once again, hun!). I think it was easier for her to agree to the trip since I wasn't going anywhere very romantic or good for couples: just Paris then rural southern France and then up through some of the most scenic wine producing regions in the world. To add to my adventures in France it turned out that there was an Ironman triathlon 2 hours (by high-speed train) north of the conference in Vichy France. Carpe Diem, two birds with one stone, and all that jazz! I'll cover the Ironman in my next post.

I scheduled a day in Paris at both the beginning and end of the trip to see some of the sites and do the touristy thing. Of course, the touristy thing isn't really my shtick so I changed things up a bit by figuring out the Paris Velib bike rental system. Paris has made a concerted effort to make the city more bike friendly in the last 5-10 years.  The Velib rental system has automated check out racks that are supposed to be located roughly every 300 meters.  A bike check-out pass only costs about $2 U.S. dollars a day.  As long as you check the bike back in to a rack every 30 minutes it doesn't cost anymore.  If you keep the same bike beyond 30 minutes there are additional small charges for each half hour.  I first jumped on a Velib bike early on a Sunday morning which was a wonderful time to ride around Paris. This was vacation season for Parisians and Sunday mornings are slow in general. The city has an ok network of bike lanes- including some awesome pedestrian-only paths along the Seine river. Overall it is certainly a work in process, but it has caught on big.  The Velib bikes seem to be used more by Parisians than by tourists.  It was quite common to see both men and women in full business attire taking the bikes to and from work.  Awesome!

On the touristy front I saw the Notre Dame Cathedral which was amazing in person. Also great for someone who studied a good deal of medieval history mostly from textbooks and computer images. The scale of this cathedral was simply stunning. 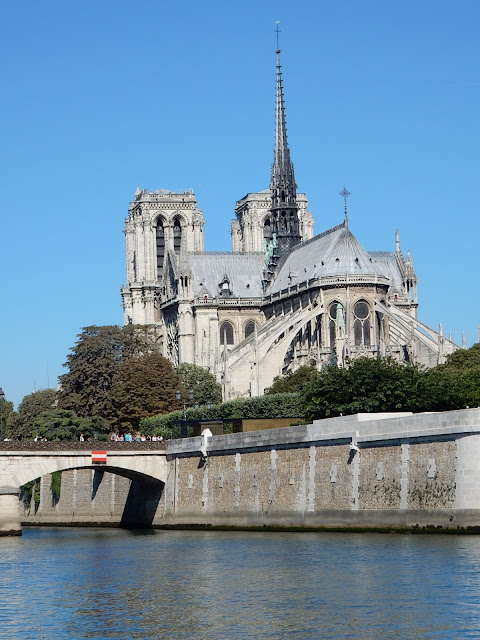 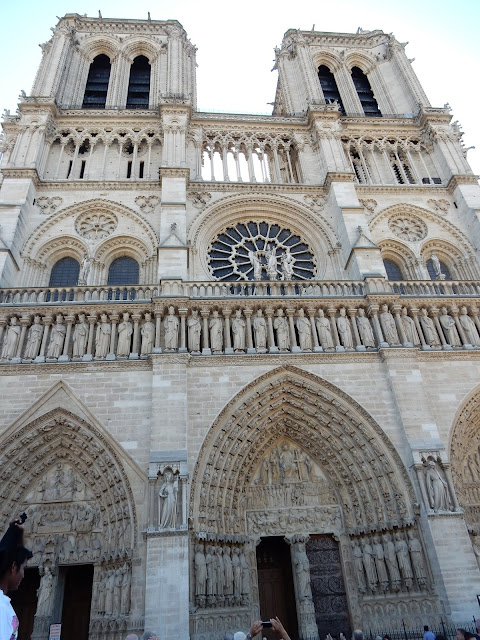 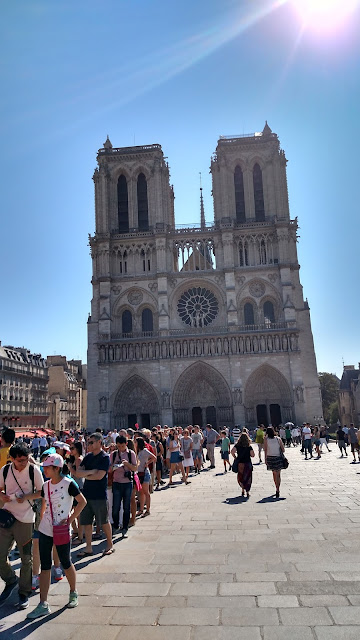 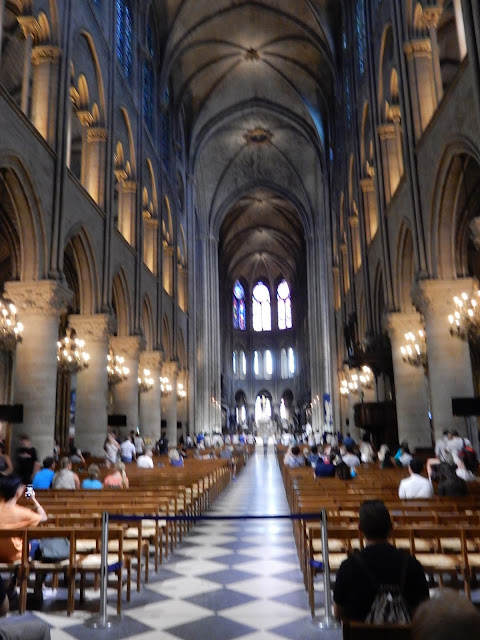 Next I made my way over to the National Archives which seemed like a great stop for a librarian and historian.  This was probably the most disappointing stop of the entire trip.  The building itself was amazing, but it was sweltering inside since it has never been renovated to include air conditioning.  Because of this almost everything that was on display was a copy of the original. From an archival perspective, this the right thing to do, but historians like to see the originals!

Only a few blocks from the National Archives was the Picasso museum which is actually a relatively new museum in a renovated old hotel. As the name indicates almost everything across 3 large floors was all Picasso.  Well worth the stop!


After a day in Paris I headed to the high-speed train (TGV) station. Here one of the most stressful moments of the trip occurred as I kept trying to ask various officials in my broken French and English about where I should load my bike case.  According to the TGV website bikes in cases are fine. No one seemed to have ever seen a bike case before. For awhile I thought they weren't going to let me on the train.  As the train was getting ready to leave I basically just drug the things up to the top level and left it in a hallway area. After that I stopped asking questions and just acted like I knew what I was doing.

This wasn't the end of the bike case being a huge pain during the trip. I took the TGV from Paris to Avignon and then caught a regional train to the small town of Entraigues Sur-la-Sorgue. I arrived in Entraigues on a Sunday evening during a pretty hard downpour.  I had planned the trip well up to this point, but just figured I would either walk or take a bus or taxi to my hotel.  Well, being a Sunday night in a small town there were no buses or taxis. I couldn't pull up a map on my phone, so I had to text Cara back home to look at Google maps for me.  With some basic directions I headed out into the rain dragging my bike box and luggage behind me.  Of course, this didn't fit down all the sidewalks so I walked in the road until cars came and then tried to get back on the sidewalk.  The hotel ended up being a little more than a mile from the bus stop, but it was a pretty miserable mile! 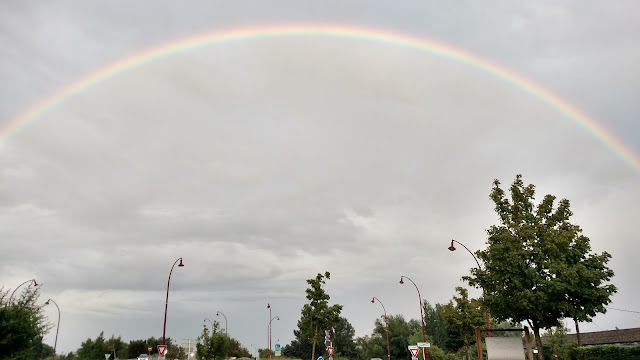 Entraigues was a great small town in Southern France. For the cyclists out there you can see Mt. Ventoux from town. I hated to pass on riding up this classic Tour de France climb, but it did not seem wise a few days before an Ironman!

The International Cycling History Conference was four days long including a mix of presentations and excursions to nearby bicycle history sites. The conference site was chosen to commemorate the 150th anniversary of the first long distance bicycle ride from Paris to Avignon. In fact, a few of the conference participants rode this same route prior to the conference on original velocipedes (boneshakers) prior to the conference. Velocipedes were the first pedal-driven bicycles. I love to see collectors actually riding old bikes, not just putting them somewhere to look at. 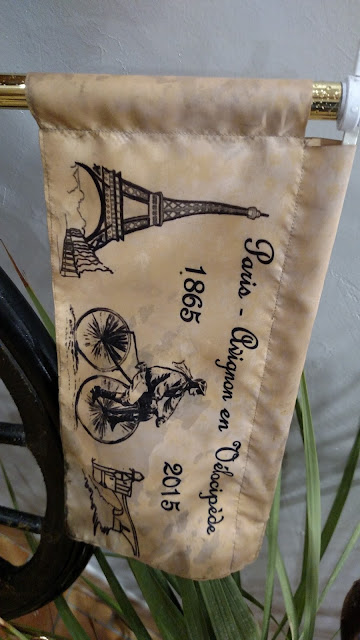 The presentations were equally fascinating. Because of the 150th anniversary, many presentations focused on very early Velocipede history (1860-1870). The only other person I knew at the conference was Carey Williams from Chicago.  He gave a very interesting presentation on the first wire-spoked velocipede wheels which -as you can imagine- was a major technological leap forward from a wooden or iron spoke wheel. If you are curious about the lineup of presentations, check out the full conference program. The presentation that I was there to deliver was: "The Forgotten Contributions of Central Illinois to the Bicycle Boom of the 1890's." I needed some subset of my larger research that could be delivered in about 20 minutes. This is truly mostly forgotten history. The Peoria-area in particular was a major producer of bicycles during the 1890's. After the presentation I learned that there are some posters of Peoria bicycle companies in French museum collections! My presentation (minus all my commentary) is located here. 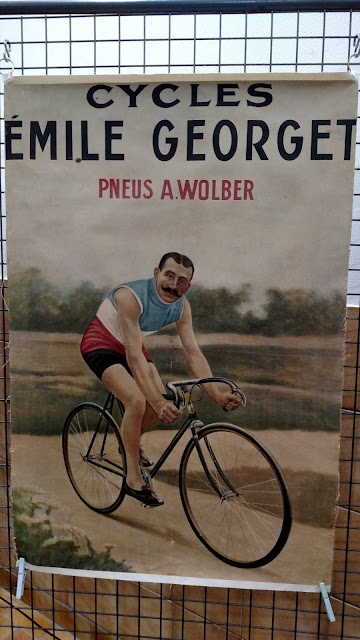 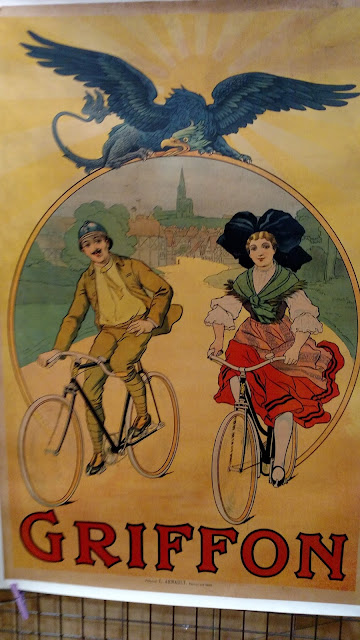 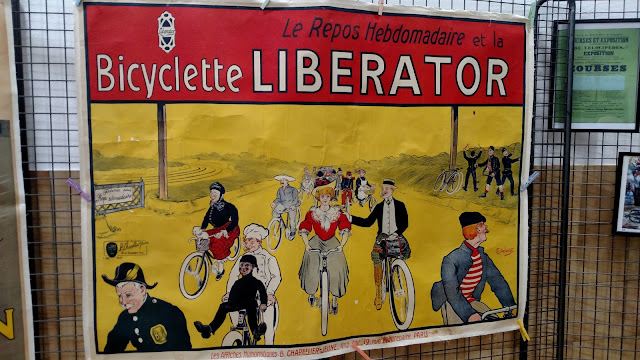 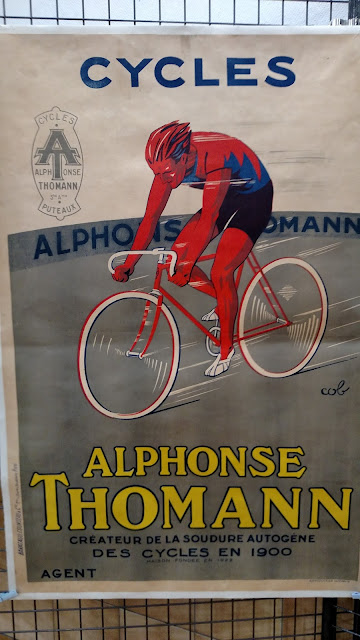 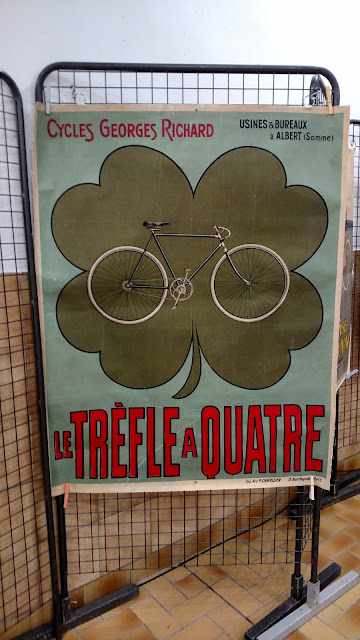 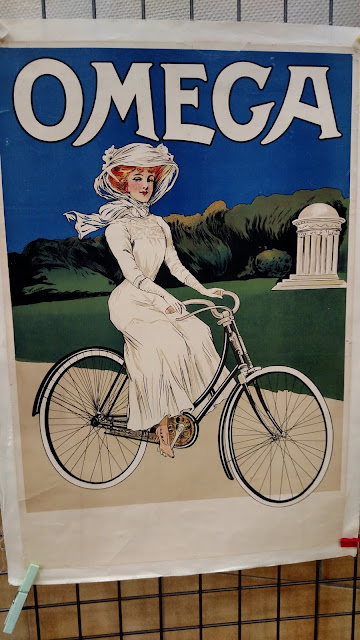 One afternoon we took a trip back to Avignon to visit a number of sites with historical significance to cycling. As luck would have it, it was also Liberation Day (commemorating the WWII liberation of Avignon by French and American forces) and there were parades with old American army jeeps and tanks and well as people dressed as American soldiers! Nice for our country to be remembered for a positive historical contribution rather than more recent controversies like spying on French officials emails and not sending major officials to the march following the Charlie Hebdo killings. 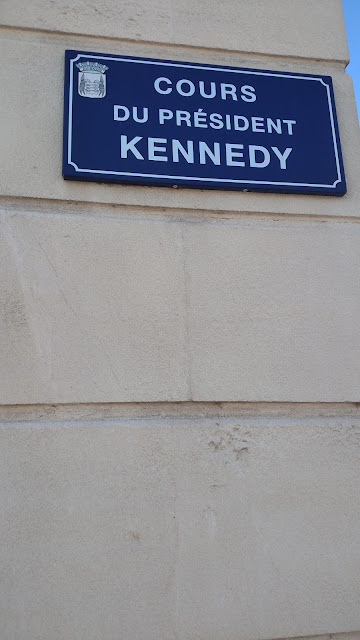 Local historian/author/collector Claude Reynaud had portions of his collection on display each day at the conference site.  This included a number of posters and old bikes.  One of the highlights of the entire trip though was an evening excursion to Claude's museum. His museum is in a wonderful, rural, 19th century mansion (Chateau de Bosc). The highlight of the collection is rare old bikes, but he also has many motorcycles as well as the modern art collected by his wife. The mansion grounds also include extensive organic vineyards. 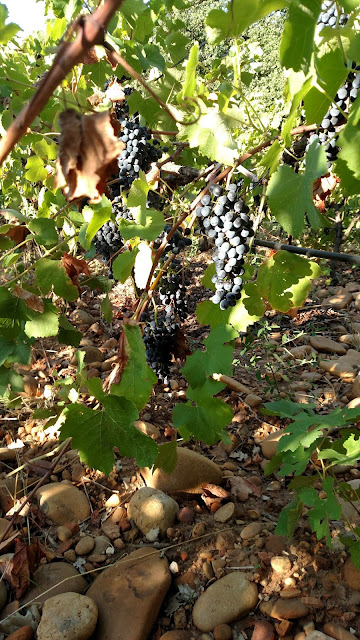 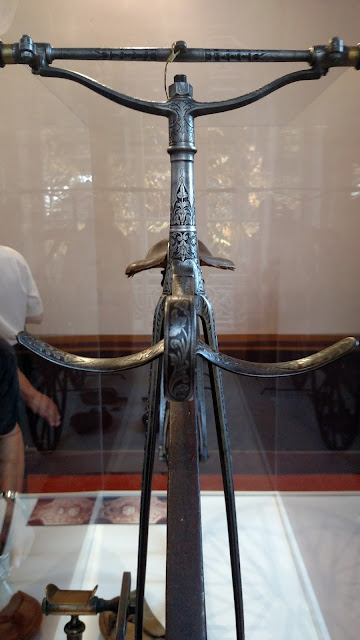 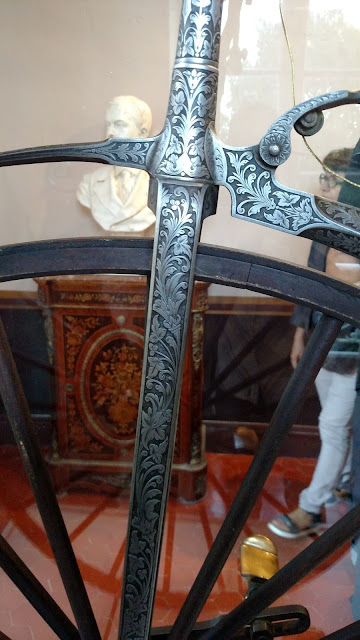 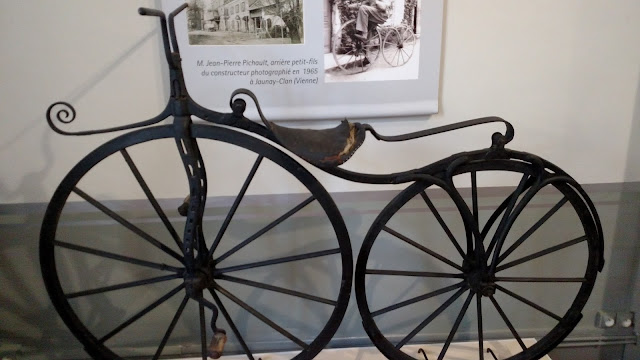 After spending time with the museum collections we were treated to wine from the vineyards and traditional French paella which is rice, seafood, chicken and seasonings cooked in huge pans. We ate and drank outside beneath old fir trees. Afterwards I posted this on Facebook:

Committing to studies in the humanities is a difficult and not at all profitable career path. We do it because of passion for our subject matter and a belief that our work remains vital. It is almost never glamorous, but tonight was a rare exception. My interest in bicycle history has brought me to southern France to a bicycle/motorcycle/contemporary art museum housed in a 19th century French mansion. Did I mention there is also a large, organic vineyard on the property? Amazing.

That pretty much sums it up! The ICHC was a great experience overall. Next year the conference is in New Haven, Connecticut which should make for easier travel! After the conference I caught a bus from Entraigues to a train in Avignon to the TGV station then to Lyon where I rented a car and drove 2 hours to Vichy where I raced an Ironman triathlon...but I'll save that story for the next installment! In the meantime, I have lots more photos in this album!