Fueled by the Baconator! 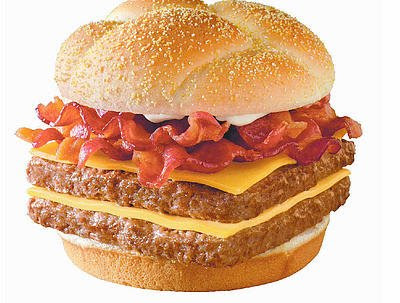 Wow a full weekend of triathlony goodness and I'm wiped out! I'll try to give you the condensed play-by-play version, but extreme sleepiness could result in random tangents and musings....
This weekend marked my last race before the big 'un. I chose the Great Illini 1/2 IM (there is also a full!) in Neoga, Illinois which is about 2.5 hours south of Bloomington. I picked this race primarily because the timing was just about perfect for a last really hard tune-up race.
I was excited about the race because it was also kind of a return to roots sort of event. When I started doing this sport more seriously 5 years ago, we almost always carpooled and camped out before a race. If the overnight temps are decent, I probably still prefer this to a hotel. I love camping and have no problem sleeping in a tent.
I was travelling down to Neoga with my brother and sister-in-law who were both racing the half as well. We had the blue magoo (Saturn Vue) packed to the gills with race and camping gear. We stopped in the last "big" town before Neoga to eat. Apparently there is very little to do in the Mattoon area, because every restaurant in town was absolutely packed. Not wanting to waste potential sleep waiting for a table we eventually opted for Wendy's. Now in general, I eat really well (copiously yes, but primarily healthy whole foods). My philosophy is if you are gonna splurge, you might as well do it right! I knew I was going to burn through a butt-load (that's a clinical term) of calories at the race, so I fueled up with a Baconator (pictured above and a chocolate frosty). You can have your carbo-dinners, I found my new pre-race meal!!! If greasy food helped Stuart Hayes dominate the field at the Chicago Tri it must be good for the rest of us, right?

The campground was within a quarter mile of the start, so I thought that gave me leeway to sleep in a bit. Darndest thing- getting up an hour and 15 minutes before the start of a 1/2 IM where you haven't gotten your packet yet, makes for an action-packed morning!

Morning temps were great- low 60s. Winds were low as well. My goal for this race was just to go hard and get one last good race in before Kona. After a VERY short swim warm-up I took off with my wave. The 1/2 only had about 200 people total and a couple waves. I was at the front of the swim with a few others right off the bat. Buoy spacing and orientation was a bit confusing and added some time to the swim, but I felt super-solid and shouldn't have any problem holding the same pace for 2.4 (I swam about 30 minutes flat).

I exited the swim with one other athlete from my wave and there was one more a little bit ahead. One mile into the bike, I had overtaken both and was in the lead! The bike course is mostly flat, but not that fast due to four 180 degree turnarounds. Nothing kills the average speed like coming almost to a stop and turning around. The positive side was that I got to see where the rest of my competition was after each turnaround. I've been hitting a bunch of long, progressive rides and was hoping that training would pay off at this shorter distance. I knew one of the biggest threats on the bike would be my buddy Kyle May owner of Spin City Cycles in Decatur, Illinois. Kyle is an excellent biker and has made up the swim deficit in more than one race. Fairly early on in the race it was me in the lead, Kyle chasing in second and my brother Andy cranking it out in 3rd place. That's the first time that Andy and I were both near the front of a race- pretty damn cool! The wind picked up a bit and the north sections were quite slow. I was hoping to match my power from my excellent ride at Steelhead and just kept my effort pegged at around 240 watts. Kyle moved up and fell back a bit at points, but I was able to maintain the overall lead (but didn't have fastest bike split). The numbers: 237 ave. watts good for 23.3 mph.

I came into T2 with about a 3 minute cushion. I was feeling really strong and modified my race plan a bit. If I ran all out and went for a big PR, I would certainly end up with some nasty blisters and a couple extra days of recovery. I decided to run the first 6 at a quick, but reasonable pace and then run the last 6 all out. Good news is that I felt very strong right off the bat. There was none of the "muddle through the first few miles" until I hit my stride. Since the run course consisted of two out-and-back "loops" I could keep tabs on the competition and was glad to see I was putting even more time on the field without running all out. At the half-way point I upped the suffering level to standard race intensity. This method seemed to work really well. I felt good, but not great, for the remaining six miles. The course is nearly pancake flat, but my split was definitely a nice surprise: 1:25 (about 4 minutes off my open pace).

So I ended up notching my second overall win at this race which is a nice pre-Kona boost! 3 years ago I had my first long-course win at the debut Great Illini Half. Time was 4:22 which is a pr of 2-3 minutes for me. Due to a solid day in all three disciplines I actually ended up finishing almost 20 minutes ahead of 2nd.

I dedicate this victory to Dave Thomas, founder of Wendy's!

Generally racing a half IM will wipe me out for the whole weekend, but we knew a ton of people racing at IM WI and had to get up there to do some hardcore spectating. We crashed at home Sat night, then got up stupid early to drive to Madison and catch the racers out on Old Sauk hill. We brought along an entire box of cowbells that were left-over awards from one of our local races. Heather distributed these to spectators on the hill and holy Wisconsin Ironman Cow did that make an awesome racket! We knew so many racers that we had someone to specifically cheer for every 5-10 minutes. The racers had pretty much the nicest weather of any of the Wisconsin races (I've raced or spectated almost every one). The great conditions showed in the times- a new course record on the men's side and blistering age group times. EvoTri members JP and Michelle both had excellent races and met their goals. JP had a stellar debut race, placing 5th in 18-24 (10:13). Michelle broke the 12 hour mark with a big PR over last year (11:52). Way to go Evo! We also had about a dozen Tri-Shark members at the race. Mostly great races with Tri-Shark expatriate Drewbie leading the way with a 10:20 and going all the way to good buddy Meredith's first time finish in just over 16. Great job everyone, it was so much fun to watch all of you!

Chris - Awesome job on Saturday! Every time I saw you, you looked so smooth and strong! Way to go! Maybe someday I'll be able to race that well!

YOU WON the whole freaking thing!? No, you crushed it. A 20-minute gap, WOW awesome job out there!