Train your weakness, race your strength! 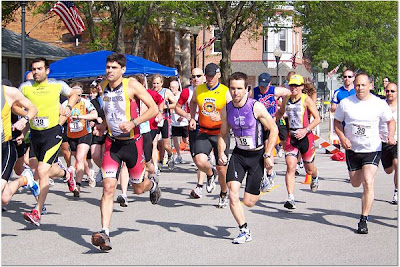 One of the most common mistakes that I see newbie triathletes making is putting way too much training time into their strongest discipline. Triathlon is all about achieving balance by eliminating weakness. Many people come to tri from a long running background. Instead of putting all their focus on swimming and biking, they will try to keep doing the same types of running workouts and volume that they did before coming into tri. This is a recipe for very ineffective tri training. It's almost absurd how little you can do in your strong sport and still maintain a high level of fitness. For example, I come from a swimming and running background, but have always lost ground on the bike leg. Over the last 5 years, I've dedicated over 60% of my TOTAL training time to biking. I achieve a high level of fitness from the bike workouts and do mostly maintenance work in the other sports. I've been focused on Ironman racing and yet I rarely run more than 25 miles a week. I generally swim 3 to 6 thousand yards. Granted most of my "strong sport" work is high quality, but it goes to show that in triathlon you have to determine your training priorities and stick to it!
All this serves as a circuitous introduction to my race report from this past weekend's duathlon endeavors. As part of my plan to save the planet (actually it's my checking account) I am doing a lot more of the smaller, local races this season. The Hopedale duathlon was a first-year event about 20 minutes from home. It was perfect timing to get in a tune-up race before Tri-Shark, my first larger, more competitive, tri in two weeks.
Outside of an off-road duathlon that I did a couple years back this was my first foray into duathlon. Although, I would never give up triathlon racing for duathlons, I do have to admit that it was nice not having to start the morning by jumping into a freezing lake! This du was a 2 mile run followed by 13 mile bike and another 2 mile run. These short distance are definitely intimidating for someone who focuses on races that last longer than the work day! I haven't ran two miles really hard since college track. This is definitely where "racing my strength" came into play. I didn't know what sort of uber-bikers might be in the field, so I knew I had to do my best to get a cushion of time on the first run. I took off in the lead from the start and was feeling strong and smooth. There was no mile mark, so I just went off my perceived exertion. I came into the transition around 10:30, which if the course was accurate, is pretty darn quick. 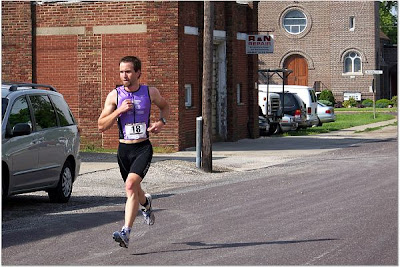 I didn't waste any time looking to see how close the chase group was. I jumped on my bike, determined to have a good ride. It was fairly windy so I found myself looking at my powertap more than usual. Generally a sprint, is just all out, but I tried to keep it under control in the headwind. At a couple of the corners I glimpsed a few chasers, but I just put my head down and kept going. The course was mostly flat with a few small rollers in the second half. Pretty soon I started thinking I wasn't going to get caught on the bike, which never happens. Sure enough I rolled into town still in the lead. Another solid ride for me at around an average of 270 watts and just under 24 mph. My pie-in-the-sky goal will be to hold that same effort level for twice the distance at the Hyvee triathon. 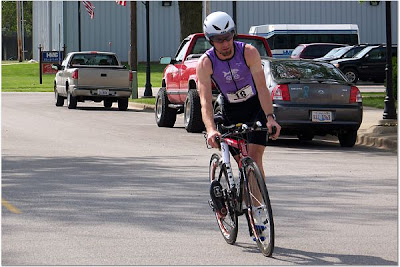 I knew I had the race wrapped up going into the second run, but I was still trying to convince myself to see if I could match the first run. This sounded great in theory but, after a hard run and ride the mind just wasn't having it. I'd like to think that under pressure I could have ran as fast or better, as it played out I ended up just a little over 11 minutes. 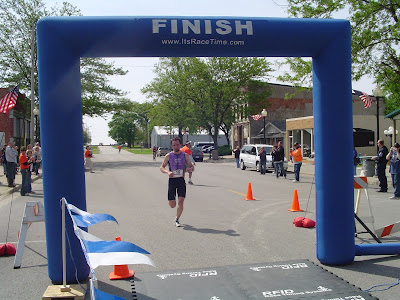 My long-time local training partner and competitor, Brian Rossi locked up second place overall. Brian has just ditched his Litespeed for a BMC TT02! This was something like his second ride ever on the bike. Needless to say he is pretty happy with the decision! 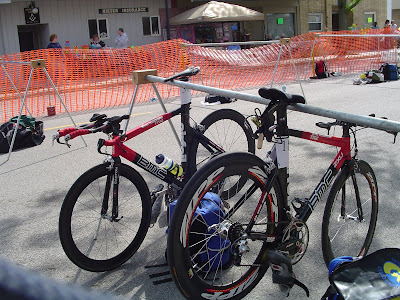 Train your weakness, race your strength.

Wow that's the best advice ever. And holy crap, 270 watts...what an incredible day for you!!! Congrats!

Nice job Chris! I have my first tri of the season on Saturday and I've got my fingers crossed that it will go well. You're totally right about the advice...now if I can just put it into practice.

Nice finish and good reminder, although that means more poop, I mean pool time for me.

I tried this strategy this season letting my strength (the bike) lag behind while I focussed most of my efforts on improving my run times - result - a 10 minute improvement in my run leg time at my A race. I'm glad you uber athletes are preaching what I'm doing!!

Nice report Chris. I feel like I should call my friends and say "hey, I know that guy. He is so darn fast"